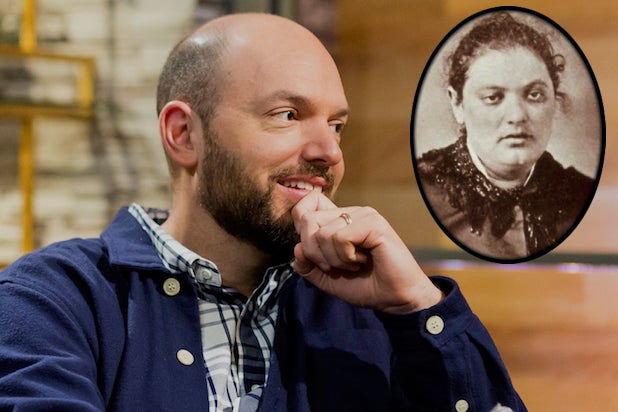 If you’re planning to be in Los Angeles on Monday, Paul Scheer wants to invite you to a show-and-tell session — with a special musical guest.

Scheer stars in “The Disaster Artist” and “The League,” and hosts two of our favorite movie podcasts, “How Did This Get Made” and “Unspooled.” On our “Shoot This Now” podcast, he recently explained the awesome format of his live show, “Hanging With Paul Scheer.” You can listen on Apple or right here.

Also Read: Paul Scheer's 'Galaxy Quest' Show Is in a 'Hold Pattern' - But Will Be What 'Force Awakens' Is to 'Star Wars'

Okay — we’ll explain it. Though he explains it better on the podcast, where he also pitched an amazing movie idea about Bertha Heyman, the 19th century con artist who appears with him in the photo above.

Basically, Scheer invites a guest, who brings an object that provides a jumping-off point for bizarre stories, discussions, and general fun. Then a musical guest appears, but you don’t know who it will be. Past guests include Will Ferrel, Zach Galifianakis, Weird Al, Jon Brion, Tig Notaro, Alison Brie, Yvonne Orji, Tony Revolori, Natasha Leggero, D’arcy Carden and more.

It’s at 8:30 Monday at Largo at the Coronet, which is a really comfortable, friendly venue, and you should go.

Scheer will next appear onscreen in the pizza-murder movie “Slice,” which features the acting debut of Chance the Rapper.

If you still aren’t convinced you should go, start listening to “Unspooled”: It will win you over. Yes, it kind of feels like we’re planning your whole weekend out for you here, but hey, we wouldn’t make these recommendations if we didn’t stand by them. We want you to have a great weekend. And something fun to look forward to on Monday, too.