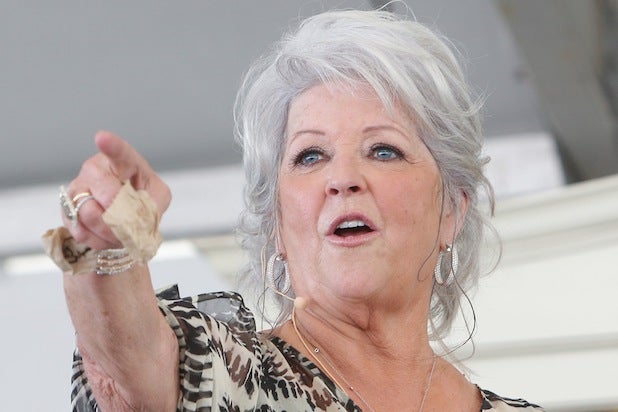 Paula Deen is cleaning up her mess with Texas.

“These are tears of joy, y’all,” said an emotional Deen, who cried during a minutes-long standing ovation Saturday at a Houston-based cooking expo — the embattled TV personality’s first public appearance since her media empire crumbled when she admitted to using the N-word.

With friendly demographics in mind, Deen chose the local show – where she’d appeared twice before – to begin rehabbing her image, which took a devastating hit when a racial discrimination and sexual harassment lawsuit revealed that she’d used the slur.

“The one place I wanted to make my first step out was in Texas,” Deen said. “You are forgiving folks with hearts as big as your state.”

An employee at the Savannah restaurant that Deen owns with brother Bubba Hiers claimed the place was rife with racism, sexism and threats of violence. The deposition revealed that Deen used the racial slur in conversation and once tried to plan a plantation-themed wedding for her brother (the sides settled the sex harassment part of the lawsuit shortly after a judge threw out the racial discrimination portion last month).

But the damage was done.

The 66-year-old TV personality was fired by the Food Network and watched several lucrative corporate endorsement deals go down the garbage disposal as the scandal unfolded. She also had a half-dozen books in the works canceled by her publishers.

“We all experience pain in some way but pain is also a good thing because it makes you grow,” Deen said at the Metro Cooking & Entertaining show, a two-day expo that ends Sunday.

After her emotional reception from the crowd of about 1,500 at Reliant Center, she kicked off two cooking demos, with sons Bobby and Jamie Deen – food celebs in their own right – by her side.

According to the Houston Chronicle, which was first to report on Deen’s appearance, she quickly warmed up after participating in a demonstration, walking up to a cameraman at the end of her demo, putting her face in the camera and saying, “I’m back!”