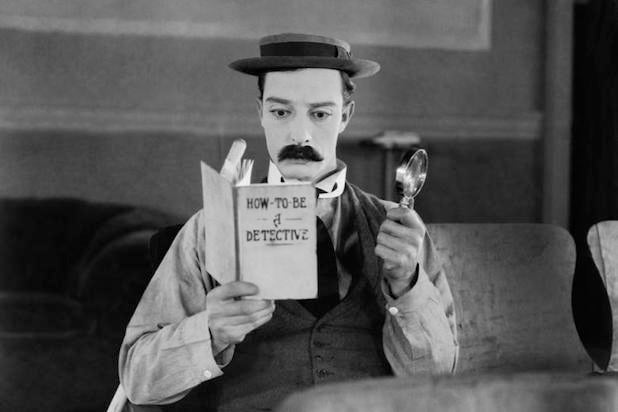 Almost half a century after he made a documentary about director John Ford, Peter Bodganovich is back with his second look at a classic filmmaker. “The Great Buster: A Celebration,” in which the director of “The Last Picture Show” and “What’s Up, Doc?” follows the life and career of pioneering silent comic and peerless stuntman Buster Keaton, opens on Friday at the Nuart in Los Angeles.

Featuring abundant Keaton footage, from the classic boulder chase in “Seven Chances” to television commercials he made near the end of his life, “The Great Buster” also finds Bogdanovich talking about Keaton with a potpourri of fans that includes Quentin Tarantino, Mel Brooks, Werner Herzog and Johnny Knoxville.

The film is structured chronologically, with one big exception: When it gets to 1923, when Keaton began a string of 10 landmark features that included “The General” and “Steamboat Bill, Jr.,” it jumps forward six years and saves the best stuff for last.

Bogdanovich, who was also instrumental in Netflix’s recent completion of the early ’70s Orson Welles movie “The Other Side of Midnight,” spoke to TheWrap about Keaton, old movies and why he’s not worried about the demise of the video store.

You haven’t done a documentary on a filmmaker since “Directed by John Ford” in 1971, have you?
I did John Ford, that’s right. And then I didn’t do a documentary until Tom Petty [“Runnin’ Down a Dream” in 2007]. Won a Grammy for that. I’m very proud of it.

So why do one on Buster Keaton?
Charles Cohen financed it. He owns the rights to the ’20s pictures, which is all the good stuff, and he asked me if I would be interested in doing a documentary on Keaton. I said yeah, and it was as simple as that. I loved Keaton. He was one of the two people that were alive in my lifetime that I didn’t meet, that I wanted to: Buster Keaton and Noel Coward.

Did you pass up chances to meet them?
With Keaton, I was just trying to find out where he was, and he died. We lived not that far away from each other in the Valley, and I was trying to find him. That was a near miss.

I definitely had a chance to meet Noel Coward, and it was sort of stupid of me. I was in Vevey in Switzerland, shooting “Daisy Miller,” and he was just up the mountain there. I thought, “Well, he’s not going to want to meet some young American director, why should I bother him?”

But he died about a year later, and about a year after that I met his executor, Graham Payn, because Audrey Hepburn and I were talking about doing “Private Lives” on Broadway. And Graham said, “You know, one of the last films that Noel saw was ‘Paper Moon,’ and he loved it.”

And I thought, “S—.” I would like to have heard him say that.

Do you remember your first exposure to Keaton?
I’ve been a fan of Keaton’s since I was about 5 years old. My father, who was quite a bit older than my mother, grew up with silent pictures. Sound didn’t come in until my father was 30. So he took me to the Museum of Modern Art in New York to see a lot of silent films. The first movies I saw, really, were silent pictures: Keaton, Chaplin, Griffith, Harold Lloyd, those people.

I loved Keaton. In fact, when I made the chase sequence in “What’s Up, Doc,” I said, “This is a Buster Keaton chase.” There were only a couple of jokes we stole from Keaton, I think, but the idea was sort of Keaton-esque.

I assume you started the film with a pretty good idea of the story that you’re going to tell. Did it change much in the making?
Well, I don’t know where I got this idea, but it was the one good idea that I had, which was to end with the features. And the reason I did that was the old showbiz axiom, “Leave ‘em laughing.” With Buster Keaton, I didn’t want to leave them sad. And his life was kind of sad toward the end, although he was happily married, which I think saved his life. But he smoked a lot, didn’t take care of himself.

Luckily, the Venice Film Festival had celebrated him a year before he died, so I could use that in the plot to bring the features back.

Also Read: All the 'Halloween' Movies, Ranked From Worst to Best (Photos)

It’s tricky, though, when you’re going through the chronology and then you get to the great features and say, “We’ll come back to these later.”
Yeah.

You have to trust that the audience will say, “OK, you can skip the good stuff.”
Well, you know, I did it with complete authority. [Laughs] And I thought they would have to just accept it. And also, I think the fact that I was doing the narration and I made the picture sort of worked. I would usually hire somebody to do the narration, but I felt it was so personal that I could make it more personal by narrating it.

We’ve all seen the classic Keaton sequences, and you can never watch that boulder chase from “Seven Chances” enough. But were you conscious of trying to create a mixture of stuff that Keaton fans would have seen with stuff they wouldn’t have seen?
I didn’t think about it much. I just sort of followed my instincts, my gut reactions.

But you also have things that aren’t familiar, like the TV commercials he did late in his life. Was there footage you found that surprised you?
Not surprised me. I knew of the commercials but I hadn’t seen them, and those were fun. I thought it was funny and sad that he had to do that. I was sad that he didn’t have a comeback. But that’s America.

So making this film sounds like a pretty smooth process.
It didn’t present any difficulties. The biggest challenge was the thought of putting all the features at the end. How do you get on, how do you get off? That’s show business.

We’re in an era now where if you want to see an old Buster Keaton movie, you can probably do it with a few clicks. With the rise of Netflix and Amazon and all, more old movies are available immediately than ever before. But if you can’t find it online, the video stores that would actually have stuff like that are…
Gone. Gone with the wind.

Is that troubling to you?
No, because all of it is available on DVD. I mean, most of the films you want to see, you can get them on DVD. All of Keaton is available. Everything, including the stuff that isn’t good. Older films are more available now than they’ve ever been, I think. I don’t know if there’s interest in them, but they’re around.