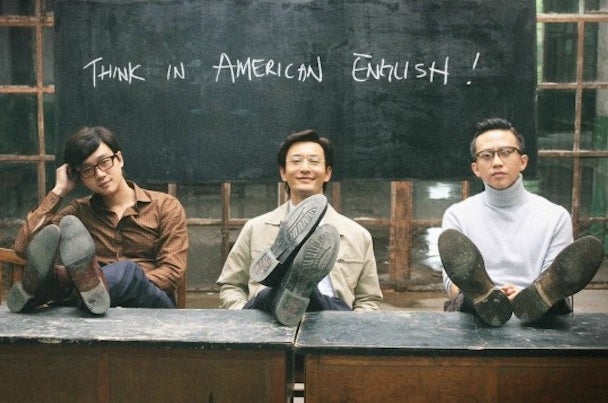 Hong Kong director Peter Chan grew up as a teenager in Thailand and went to college in America, and now he is working with Beijing film producers to tell a tale of ”American Dreams in China.”

It’s not a ”Hong Kong” movie at all, and it’s not really Chan’s film, since it was produced and written by Beijingers who are a bit more interested in propaganda than pure storytelling. But that’s China today, and that’s what Chan — veteran director of ”Comrades: Almost a Love Story” and ”The Warlords” — has gotten himself into.

He even gets America wrong. In a recent interview with the state-run China Daily, an English newspaper owned and run by the Chinese Communist Party, he told reporter Liu Wei that to his mind the American dream is dead and has been for 30 years.

“To me, the ‘American dream’ is going from rags to riches by fair play,” Chan said. “It does not necessarily happen in the United States, actually over the last 30 years, it has happened most frequently in [China].”

Chan’s new movie, which follows the rise of three Chinese guys from poor students to rich owners of a national English cram school chain, opened in Beijing in April and was well-received there, of course.

In the movie, it’s 1993, and three young men in Beijing hatch a dream: build a chain of English-language schools and get rich doing so. And they succeed.

A propaganda minion would likely put it this way: When Yu Min-hong, a former English teacher at Peking University, spent all night posting advertisements for his classes on Beijing’s lampposts, he probably did not realize he was launching an educational empire that would grow to employ 17,000 teachers and over 2 million enrollments.

Did any of the three men use their connections, or “guanxi,” to get the required licenses and pass through all the obstacles in their way? The movie does not go there. But it does show how Yu, when he realizes he has finally made it and has a pile of real money in his hands, throws the bills into the air in a show of complete abandon and excitement. Yes, he was one happy man.

But director Chan did not write that scene — and he did not even find it believable himself, but he had to film it and keep it in the final cut, according to the Beijing media. His scriptwriters, all Beijingers, wrote it. When Chan told them the scene seemed fake, his Beijing producers told him that they had done the same thing when they first started making money. In fact, Han Sanping, chairman of China Film Group and one of the film’s producers, told Chan he should have made the scene longer!

The film might come to North America and Europe with subtitles in the future, and it will surely be an educational tool in cross-cultural communication. The American Dream is dead, and the Chinese Dream is alive and well. Catch the film and see for yourself.

While the three dreamers made millions, they later fell out over “differences.” Not even realizing the Chinese dream could keep the partners together. So there’s a moral to the movie, and that’s most likely where Chan was aiming.