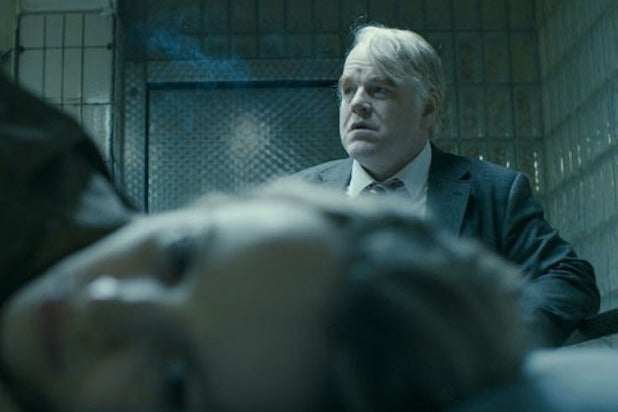 Philip Seymour Hoffman is gone, but like many actors who have died entirely too soon, he’ll be seen and heard from again in a number of projects he completed before his death.

For starters, his fans can anticipate two independent dramas that screened at this year’s Sundance Film Festival.

Hoffman reunited with his “Charlie Wilson’s War” co-star, John Slattery, to star in Slattery’s directorial debut, “God’s Pocket” — a gritty drama about a man who tries to cover up his stepson’s “accidental” death at a construction site. As if the unexpected death wasn’t bad enough, things get worse when a local columnist starts digging for the truth. Christina Hendricks (“Mad Men”), John Turturro, Eddie Marsan and Richard Jenkins join Hoffman on screen in the film that IFC will eventually release after acquiring the U.S. rights last month.

Hoffman’s second Sundance drama, “A Most Wanted Man,” does not have a U.S. release date yet either, but Lionsgate will eventually put the spy thriller from director Anton Corbijn (“The American”) in theaters. The adaptation of John Le Carre’s novel follows German spy Gunther Bachmann (Hoffman) as he tracks down a suspicious Chechen-Russian immigrant on the run in Hamburg and ends up uncovering a connection between a world-renowned Muslim philanthropist and a terrorist group. Rachel McAdams, Robin Wright, Willem Dafoe and Daniel Bruhl co-star alongside Hoffman.

The “Along Came Polly” actor, who was nominated for four Academy Awards honoring some of his most dramatic work — including performances in “Capote” (for which he won an Oscar), “Doubt” and “The Master” — was also planning a return to comedy. Hoffman was set to lead the cast of a Showtime series called “Happyish,” which was announced just two weeks ago by the premium cable network and is now in limbo.

Hoffman only shot the pilot episode of the series revolving around an advertising man who worries he’s been rendered obsolete as he struggles to function in a world obsessed with Twitter and branding. Kathryn Hahn and Rhys Ifans co-starred in the new series that Showtime must now decide on either scrapping or continuing with a new male lead.

Also read: ‘Happyish’ Creator on Philip Seymour Hoffman: ‘The Biggest, Brokenest Heart of Anyone I Have Ever Met’

HBO was faced with a similar dilemma last year after the passing of James Gandolfini, who had starred in the pilot for “Criminal Justice.” The network ended up recasting Robert De Niro to replace Gandolfini, but said it will not show the Gandolfini version of the pilot to the public.

Most recently, Hoffman was seen on the big screen in 2013 box office juggernaut “The Hunger Games: Catching Fire.” He played Plutarch Heavensbee, the Capitol’s Gamemaker who eventually leads Panem’s rebel forces in the “Mockingjay” novel.

Hoffman will be back for two more installments of the Lionsgate franchise, and although he still had seven days left of filming, an individual with knowledge of the production told TheWrap that his death will not affect the release dates. It’s still not clear how the studio will alter the filming schedule or how it will find a way to work around his absence.