This review for “Pleasure” was first published on Feb. 3, 2021, after its premiere at the Sundance Film Festival.

“Pleasure” examines the toll of putting ambition before friendship, and of a career woman who endures the worst of her industry only to perpetrate it herself once she has climbed the ladder. Ninja Thyberg’s film happens to be set in Los Angeles’ adult-film industry, but it’s a tale that could just as easily be set at a law firm, brokerage house, or Hollywood studio.

Granted, Thyberg doesn’t shy away from the specifics of her milieu — the film’s premiere last year at the Sundance Film Festival shocked audiences with its graphic, and sometimes grueling, sexual content — but it’s not an exposé on what pornography does to women as much as a harrowing examination of what the workplace expects and allows from women and men. 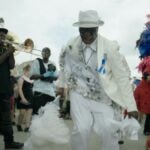 At her first photo shoot, Bella is fascinated by the aloof Ava (Evelyn Claire), who’s the newest “Spiegler Girl,” a vaunted group of entertainers who are the highest-paid and most respected, but who are also expected to have no limits about the kind of work they will accept. Bella’s model-house roommate Joy (Revika Anne Reustle) proves herself to be a friend and ally, stopping Ava from snapping a picture of Bella without Bella’s consent, and coaching Bella on how to achieve the poses the photographer wants.

While Bella occasionally gets discouraged, she quickly learns how to play the game. After just a few weeks in town, she’s smoothly networking at an industry “pajama party,” all while Joy makes a spectacle of getting drunk, hitting on superstar Caesar Rex (Lance Hart) and, after he dismisses her as “trailer trash,” throwing him into the pool. It’s an incident that will come back later to haunt both women when they unexpectedly wind up doing a scene with Caesar, and Bella is faced with the choice of standing up for her friend or being a compliant and “drama-free” performer.

Thyberg goes out of her way to avoid painting the industry in broad strokes; on a shoot for a kink-based company where the director and crew are all women, Bella is treated with kindness, given a multitude of safewords, and tended to emotionally and physically. At another job where “rough” action is expected with callous men, however, Thyberg and Modestij’s script brilliantly and unflinchingly examines the nature of coercion as Bella’s director and scene partners badger her into finishing a violent scene when she’s clearly in distress, all the while using the language of agency and consent. The latter sequence plays like a sick parody of the former, with the idea that even the post-#MeToo era will find men in power continuing to abuse that power, only in new and creative ways. 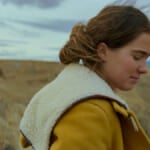 “Pleasure” is a film that’s frequently difficult to watch, sometimes because of the explicit portrayal of extreme sexual performance, but mostly for the trajectory of Bella’s dehumanization, and that’s a testament to Kappel’s forthright performance. She conveys the physical difficulties of Bella’s rise — the path to stardom is paved with some very demanding acts — but also the emotional toll of what men in power expect women to do and to accept.