It’s an apt first note for this pastoral story, where everyday life acts as a backdrop for wrenching character backstories. The script is a touch too novelistic and the ending rather predictable, but pitch-perfect performances keep this melodrama from slipping too far into mawkishness.

The titular story is one of two estranged, 20-something siblings reunited over their comatose father. At first only Cal, played by Owen Teague (“It”), shows up to get everything in order. He struggles to pay their longtime housekeeper, Valentina (Kimberly Guerrero, “The Glorias”); to reconcile his father’s debts; and to re-home his beloved (but now ancient) childhood horse. A seismic shock arrives in the form of his sister, Erin (the excellent Haley Lu Richardson), from whom he hasn’t heard in seven years. 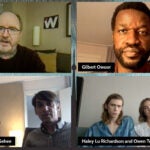 A harrowing act by their father spurred Erin’s departure, so her return has both siblings reliving their most potent trauma, just as Cal is working to keep its perpetrator alive and his estate afloat. Their father’s nurse Ace (Gilbert Owuor, “Reprisal”) lends a kind ear to Cal, but it’s clear no reconciliation can come unless the hardened Erin lets her brother back in.

Erin and Cal’s sibling dynamic is this film’s most pleasant surprise by far. Cal is a lanky, doe-eyed young man, the kind of guy who has a cat back home named Oscar Wilde and brings a copy of “Wuthering Heights” to his father’s sickbed. Three years Erin’s junior and just 15 years old when she left, Cal clearly adores his sister, and Teague carries that love like a heavy thing, a gift that has become a burden in the wake of her absence.

Erin, on the other hand, is tiny, stubborn, and harsh. While Cal has been weighed down by guilt, she’s been nursing a grudge, and she clearly trusts her brother about as far as she can throw him. When Cal tells her he’s planning to put down their senior horse, she extends her stay and concocts a harebrained scheme to tow the stallion cross-country. It’s a plan built at least as much on spite as it is on sentimentality. 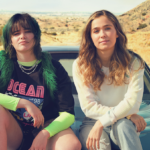 The film progresses much this way: Erin and Cal butt heads as they work to shore up their father’s estate, and eventually a crisis spurs them into a reckoning. Teague and Richardson are perfectly suited to their characters and to each other. Teague’s astonishing vulnerability is impossible to resist, and it’s the perfect complement to Richardson’s stoicism. (And when that stoicism breaks, whew! Teague and Richardson are both top-tier criers.)

The supporting cast is also fabulous, most notably Asivak Koostachin (“Run Woman Run”), who plays Valentina’s charming son, Joey, and Eugene Brave Rock (“Wonder Woman”), who steals an entire sequence as a socially awkward Craigslist stranger. Just as it says on the tin, the sprawling landscape of Montana factors heavily into the film; even though McGhee and Siegel were not familiar with the state before setting their film there, they and cinematographer Giles Nuttgens (“Hell or High Water”) make the most of its breathtaking landscapes and terrifying vastness.

Most of the flaws in this film can be traced to the script, which McGhee and Siegel also wrote, along with story help from Mike Spreter. Dialogue flows strangely in general, but especially between Cal and Erin. This 22- and 25-year-old speak with disquieting formality, their exchanges sounding more like poetic stanzas than conversation. Erin’s dialogue is particularly frustrating, her musings conjured up from nowhere in particular and her questions often rhetorical. It is as if she is speaking in riddles. 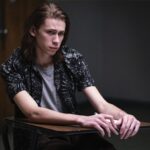 The plot also leaves something to be desired. The film’s ending feels at once expected and incongruous, and everything concludes too neatly, too soon. We see these characters go through incredible upheaval but get very little of the ensuing resolution. How can Cal and Erin heal from such turmoil? What would that look like? Other niggling details go unaddressed. (Like, while Cal is back at the ranch, who is taking care of Oscar Wilde the cat?)

Still, “Montana Story” remains a worthwhile exercise, largely because it puts two stellar actors through a monumental emotional gauntlet, and they pass with flying colors. It’s also a fascinating piece of pandemic filmmaking — this was one of the few indie movies that actually completed production during COVID. The work is all the better for those restrictions, its pared-down cast and locations leaving plenty of room for the standout performances. It’s also set during the time of its filming, so medical masks make a (sporadic, strangely negligible) appearance.

“Montana Story” may not quite reach the depths it desires — it pales in comparison to another recent, thematically similar film, Nia DaCosta’s “Little Woods” — but it is, on the whole, impressive. Fans of Richardson and Teague will surely not want to miss this entry in their growing filmographies, nor should followers of McGhee and Siegel take this lockdown achievement for granted. Like Montana’s sprawling horizon, this film is often breathtaking and complex, if occasionally a little too bare.