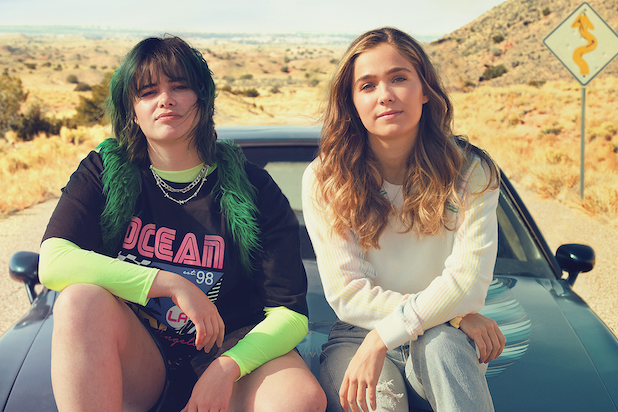 HBO’s “Unpregnant” is a female buddy road film that delves deep into the divisive issue of abortion in the United States and how different states have varying access to the procedure — and star Haley Lu Richardson says she was nervous to do a film that balanced such a serious topic with comedic elements.

“It was something that I thought about, and it’s something that you don’t have to factor into every decision when you’re signing onto a movie,” Richardson told TheWrap. “It’s a very sensitive and divisive topic. Personally, I had to decide if I was going to throw myself as a human into that whole ring where this can of worms is opened and people can decide to hate me because I’m associated with this movie. That was something I definitely thought about. On top of that, I was nervous of how this movie, because it’s comedic and it’s fast-paced and it’s a road trip adventure, that’s so ambitious to talk about this subject in the confines of a film like that. I had to think about it, and I talked to my family, and then the same things that made me nervous were also inspirations to try to tackle and to take on the challenge — I felt like if it was done right and if I did my best with this character, more young people can watch a movie like this where this topic is presented in this way and hopefully it can start real, honest conversations.”

“Unpregnant,” written and directed by Rachel Lee Goldenberg, follows Veronica (Richardson), who travels to Albuquerque, New Mexico to get an abortion after accidentally getting pregnant and realizing she can’t get the procedure done in her home state of Missouri. The comedy also stars Barbie Ferreira as her former friend Bailey who goes on the road trip with Veronica.

Richardson says throughout filming, she was very conscious about making sure the comedic aspects of the film didn’t take away from the seriousness of the subject matter, while the overall theme of the movie was to try and destigmatize abortion while highlighting two women who take control of their bodies and their rights.

“The scenes all seemed to me very challenging — even when I thought something was going to be easier, we would get into it and was just unexpected to realize how difficult it was for me in terms of balancing the truth and the real situation that Veronica is dealing with, that is extremely important in general, and balancing that with the fast-paced comedy elements of the movie,” she said. “Sometimes scenes even when they are fun in the movie weren’t necessarily fun for me — I was hard on myself in making sure that I was doing as much justice to her situation as possible. The scenes that were very cathartic and I felt like she was letting out that energy or worry and concern and shame, those were relieving.”

She added: “Everyone is treating it like a comedy or a light-hearted scene because it is and it’s fast-paced, and that’s the tone of the movie, but then I still have to figure out how to… like, Veronica is very serious, she’s taking things seriously, even when s— is hitting the fan, and while the movie is funny at times, Veronica is not in on the joke. On top of that, she’s pregnant and wants to get an abortion and has a lot on her shoulders. I had to remember that and make sure that came through every single scene.”

But Richardson and Ferreira also had a lot of fun on set.

“A lot of the scenes with just us when they’re just more chaotic scenes, we would do the scene a few times the way it was written or with just slight improvisations and then Rachel would let us do one take where we bulls—ted and said whatever we wanted,” Richardson said. “Barbie brought so much of herself to Bailey and Barbie is such a unique and incredible person and I just had fun with that character.”

One specific scene that Richardson remembers is when Veronica and Bailey do a very specific, unique handshake in the car driving to Albuquerque.

“We had a whole separate rehearsal for that because Rachel was excited about the handshake,” she said. “We had a whole hour-long rehearsal in a park in Albuquerque, and [Rachel] had all these epic handshake compilations that she showed us to inspire us, so we had a whole rehearsal just figuring out the handshake. We wanted it to be fun and specific but also something you could do in a car while you were driving. That was probably the funnest rehearsal I’ve ever had.’