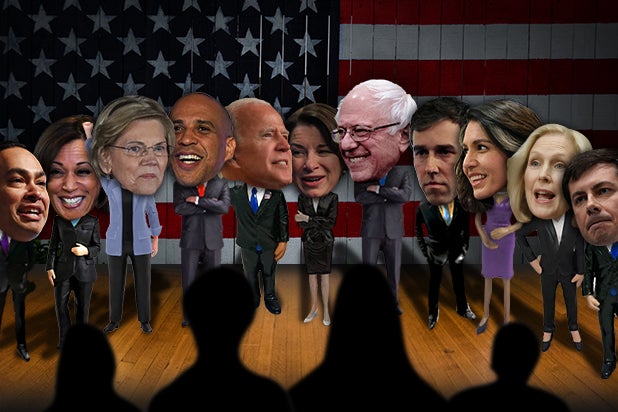 Last month, surgeon Phil Mercado and Hollywood executive Todd Quinn invited over 100 of their richest and most influential friends to sip beer, drink wine, and try to fall in love. Not in a romantic sense, but with a presidential candidate.

But no one wants to commit to anyone. “Most people want to keep their powder dry,” Mercado said.

The potential donors have the same problem as lots of Hollywood daters: There are too many attractive options, and new ones seem to pop up every day. The only thing everyone in liberal Hollywood seems to agree on is that anyone would be better than the guy they’re stuck with now.

With more than two dozen candidates either running or expected to run in the 2020 presidential race, Hollywood’s top donors are holding off on their contributions and weighing their options before making any commitments.

In 2016, the film and TV industries spent more than $86 million in donations, according to the Center for Responsive Politics, mostly on Democrats, only to see Donald Trump win the general election.

So it’s no surprise many of them are now taking a more cautious approach, according to Jack Pitney, professor of government at California’s Claremont McKenna College.

“It’s political speed dating,” Pitney told TheWrap. “They don’t want to spend money on a candidate who blows up or whose candidacy implodes.”

Many are trying to avoid anything serious right now, instead opting for high-powered meet-and-greets that don’t require anyone to sign a check to get in.

“We don’t ask for a contribution but if anyone finds a candidate compelling, they know where to find them later,” Jon Vein, an entrepreneur and longtime Democratic fundraiser, told TheWrap.

Vein, along with his some of friends, has co-hosted about a dozen meet-and-greets with Democratic candidates, including New York Sen. Kirsten Gillibrand, former Colorado Gov. John Hickenlooper and Colorado Sen. Michael Bennet, among others.

“We’ve got so many candidates, we thought we’d give them the opportunity to suss out some of the candidates they’ve never heard of or had any relationships with,” he said.

For the candidates, the non-fundraising events are a chance to make their pitch to influential and wealthy supporters, while soaking up some of Hollywood’s glitz and glamour. They hope to make enough of an impression to score donations, time, or endorsements later on.

Media titan Haim Saban, a longtime Democratic Party funder and one of Hillary Clinton’s biggest donors in 2016, told TheWrap he’s “standing on the sidelines and waiting patiently to hear what everyone has to say.”

“With so many people saying so many things, it’s kind of difficult to hone in on any one person,” he said.

Saban and his wife Cheryl, a psychologist and author, donated more than $12.6 million to pro-Clinton efforts in 2016, according to the Center for Responsive Politics. But this year, he said, he may hold out until the general election before making any donations.

“I’m just going to sit back until somebody emerges who I feel shares my views of the world,” he added.

In 2016, attorney and longtime Democratic fundraiser Dana Perlman co-hosted “countless” events for Clinton and even canvassed for her in Iowa and Nevada. But this year, Perlman has decided to give his money directly to the the National Democratic Committee.

“I am all in with the DNC,” he told TheWrap. “Only one of them is going to  make it to the mountaintop and whoever that is I want to make sure that on Day 1 that person has the infrastructure available to her or him to immediately proceed into the general election and defeat Donald Trump.”

David Schneiderman, co-owner of Seismic Productions and longtime fundraiser, told TheWrap he too was thinking of giving his money to the party instead of the candidates.

“My allegiance changes every day,” Schneiderman said. “There are so many good candidates, it’s hard to decide.”

Schneiderman, who said he attended nine Clinton fundraisers last cycle, said he was leaning towards Sen. Elizabeth Warren of Massachusetts, or possibly O’Rourke. But he added that he was waiting to hear from Biden.

Still, there are plenty of fundraisers in Hollywood these days. On Wednesday, director J.J. Abrams and his wife, producer Katie McGrath, hosted a fundraiser for Harris, an event co-chaired by some of Hollywood’s biggest names, including WME Entertainment’s Ari Emanuel, ICM’s Chris Silbermann, political consultant Jennifer Gonring, producer Shonda Rhimes and Vein. Tickets for the event were going for $2,800 per person, with co-chairs donating $10,000, according to the invitation.

No one can say how much money the 2020 candidates have raised so far. The Federal Election Commission requires candidates to file quarterly reports, and the first isn’t due until April.

But some of the candidates have released numbers for their first 24 hours following their announcements. So far, the person to beat is O’Rourke. The Texas Democrat announced Monday that his campaign hauled in an impressive $6.1 million in online donations in the 24 hours after his announcement. Vermont Sen. Bernie Sanders said he raised $5.9 million from more than 223,000 donors in the first 24 hours, and Harris clocked $1.5 million in donations during her campaign’s first 24 hours.

“I think there is a lot of excitement,” Mercado said. “Kamala [Harris] is of interest to a lot of people and so is Amy [Klobuchar]. We’ll probably end up seeing a clearer picture of who the frontrunners are closer to the debates. More people will announce before then and we’ll start to see more people falling in line behind their favorites.”

Dr. Howie Mandel (not the comedian), a prominent Los Angeles-based Democratic fundraiser who has attended several meet-and -greets this cycle said he believes the wait-and-see approach is “a good thing, not bad.”

“I don’t want to give money yet,” he told TheWrap. “Besides,” he said, “Hillary Clinton had more money than God and she lost.”