When Aaron Guzikowski’s “Prisoners” script was first sent around Hollywood, the most common complaint from agents was the project’s lack of commercial viability. A bleak kidnapping thriller is a tough sell to studios, especially one without a neat little bow wrapped around the ending.

But by 2009, Guzikowski’s dream began to come true: Mark Wahlberg and Christian Bale attached themselves to star, while Bryan Singer circled the director’s chair. However, months later, the heat had cooled, and though the script was voted to the Black List, the project still hadn’t sold and Guzikowski continued working his day job stuffing envelopes at a New York advertising firm.

Then he got The Call, the one every writer dreams of getting. Alcon Entertainment bought the script sans talent attachments. “Prisoners” was finally happening. As his manager, Adam Kolbrenner of Madhouse Entertainment, recalled in a recent blog post, Alcon founders Broderick Johnson and Andrew Kosovo called with producer Kira Davis and told him “this episode of ‘Entourage’ will come to an end now.” 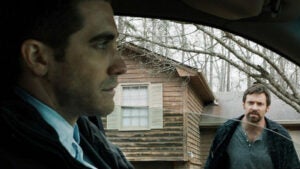 Director Antoine Fuqua came and went, as did superstar Leonardo DiCaprio, who was attached for about six months before bowing out. The project gained new momentum once French-Canadian director Denis Villeneuve came on board following an Oscar nomination for his movie “Incendies.”

See video: Jake Gyllenhaal, Hugh Jackman and ‘Prisoners’ Cast: Who Would They Want to Be Held Captive With? (Video)

With Villeneuve committed, an all-star cast and crew of past Oscar winners and nominees lined up en masse. Hugh Jackman and Jake Gyllenhaal signed on to play the two leads, bolstered by a supporting cast that includes Terrence Howard, Viola Davis, Maria Bello, Melissa Leo and Paul Dano as the primary suspect in the disappearance of two young girls. Editor Joel Cox and cinematographer Roger Deakins, who has been nominated for 10 Oscars, highlight the below-the-line talent.

Warner Bros. will finally release “Prisoners” on Friday, and Guzikowski spoke with TheWrap in advance of its opening.

TheWrap: I found the film to be gripping and haunting … where did the idea originate from?
Aaron Guzikowski: I set out to write something scary and thrilling, and what scares me most is not being able to find something you deeply love or need to survive, as well as the feeling of being lost. Then I used those fears to motivate a dramatic thriller that is occasionally a horror movie. “Silence of the Lambs” and “Se7en” are two of my touchstones as far as being amazing thrillers. It was a lofty goal I always had in terms of trying to construct something character-driven with big surprises. It started to evolve as I worked on it.

What was the biggest challenge for you in writing the script?
Constantly putting myself in the mindset of these parents. I didn’t have kids back then. I had to put myself in Keller’s mindset or one of the others parents and try to process what that experience is like and what decisions they’d make. The plotting was difficult in a different sort of way, and the writing was sort of like a maze unto itself. I tried not to overtly plot the whole thing out, because I wanted to see where each character went.

Were you ever worried that because of the nature of the material, it would never get made?
The whole time I was writing it, I was convinced it was too dark and would never get bought, let alone get made. It still had to have a soul, but that’s what the story was. Alcon was always great about that. They didn’t try to make it something it wasn’t. Everyone embraced that it was gonna be a tightening-of-the-noose kind of movie. I was convinced, as much as I loved it, that it was so dark there was no way in hell it was going to get made as a studio movie.

How did the script change over the course of the development process?
Originally, the story was more focused on Keller. The detective character was in the story but it was a much smaller part. As I developed the script, it evolved and the movie became more of a two-hander.

The movie runs 2.5 hours, but is there anything from the script that didn’t make the final cut? I heard there was more with Dylan Minnette’s character, who is introduced hunting deer with his father (Jackman).
There were scenes we had to lose. There was more stuff with the two older kids. It wasn’t so much that Keller’s son (Minette) shot a gun later, but in the original script, the two older kids are actually the ones who find Paul Dano at the end, because they’re trying to get away from their parents and crumbling home life. There just wasn’t time for it all.

I understand Jake Gyllenhaal came up with a whole backstory for his character. Can you talk about that?
He did. Detective Loki grew up in a boys home and didn’t really have a family. He’s a prisoner of his own past with his own demons, and I wanted to create an air of mystery about him so the audience would question what his motivations are. We don’t see where he lives because I wanted to keep his origins mysterious. But Jake came up with the idea of the tattoos and the freemason ring and the facial tics. All of that further accentuated that mysteriousness, where you’re never quite sure what his story is. You get a good sense of him as a person but the question always lingers.

What about Paul Dano, who is so creepy in this role, and yet he barely says anything?
Dano doesn’t get to talk much, it’s more in his mannerisms and aura. He did an amazing job. On the page, it doesn’t seem like there’s a lot to work with, but he brought it to life and gave him a soul and a life. All of the actors did an amazing job. When they locked down the cast it was incredible.

How do you interpret the ending?
I like keeping the end ambiguous for myself. We flirted with extending that scene to give audiences more closure but I like a little bit of mystery. In most movies, everything needs to be tidily wrapped up and I like that you’re not quite sure at the end of this one, even if you assume that [redacted] hears what he hears.

What about the character names? Any symbolism there?
The sound of them conjures up ideas and concepts. The girls are named Joy (Kyle Drew Simmons) and Grace (Bello), so there’s an obvious interpretation of that, but I didn’t set out to design a metaphorical meaning to it all. I just like the pentameter of certain names, and how there’s a lyrical quality to how they sound. They feel like they fit the characters. I was aware of the symbolic nature but I wouldn’t say there’s a real design to it.

What were some of your inspirations for this movie?
“Silence of the Lambs” was a huge influence. I’m also influenced by high-end horror movies like “The Exorcist” and thrillers like “Se7en” and “The Sixth Sense.” Kidnapping is part of the story but I never looked at “Prisoners” as a kidnapping movie like “Ransom.” It’s about the parents and what they’re driven to as a result of it.

I’m sure you’ll be offered a lot of high-profile studio assignments after this. Any idea what’s next for you?
Right now I’m swallowed up by the process of this TV show (“The Red Road”) which will air in February (on the Sundance Channel). There’s a lot of things I’d love to do, but I want to do another original. I like making stuff up from scratch.

The movie got some great reviews at the Toronto International Film Festival. How was that experience?
I had never experienced anything quite like that. All the craziness that goes on festival-wise was exciting. I had a ton of fun being there with Denis and the cast.

Any final thoughts?
I’m just so pleased with Denis’ work. He made a great piece of art with this movie.