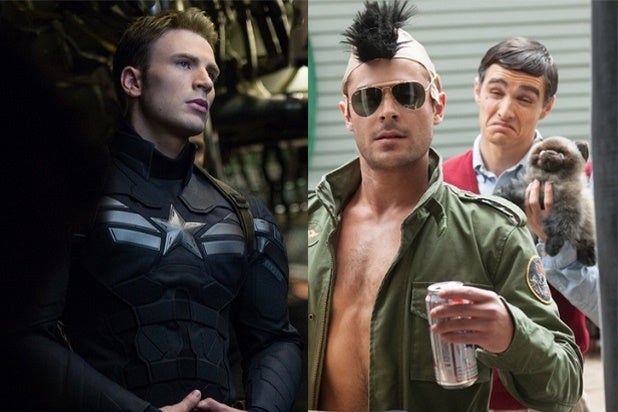 On many of the biggest Hollywood blockbusters, international grosses make up around 70 percent of the overall haul. The flip side of that is some genres, like sports and Westerns, don’t travel as well. And it’s tricky for comedies, too.

Punch lines don’t translate as well as real punches, in large part because it’s harder to get across the nuance, subtle jibes, sarcasm and satire that makes up many successful comedies. Animated films travel well, because their  humor is typically kid-level and simple. But the cultural realities and individuals that are the target of many films’ jokes can be totally unknown to international audiences. Studios will often rework those references in the dubbing process prior to overseas releases, but it’s still tricky.

Of course, comedy movies tend to be far less expensive to make than effects-laden superhero movies, so there is less need and pressure on them to perform on a global basis.

But it’s worth trying, because there are exceptions. Warner Bros.’ “The Hangover Part II” is the highest-grossing live-action comedy ever at the worldwide box office, and it took in $332 million — or 56 percent — of its $587 million global haul abroad. It’s just No. 94 on the all-time list of highest-grossing movies overall, however, according to Box Office Mojo.

Fox’s 2006 Ben Stiller comedy “Night at the Museum” and Universal’s 2012 tawdry teddy tale “Ted” starring Mark Wahlberg were both worldwide hits that made more overseas than they did domestically.

But those are exceptions to the rule, and the numbers for this year’s biggest movies bear that out. The numbers on “22 Jump Street” are preliminary, since it’s very early in its domestic and foreign runs, and none of the films’ grosses from this week are included.