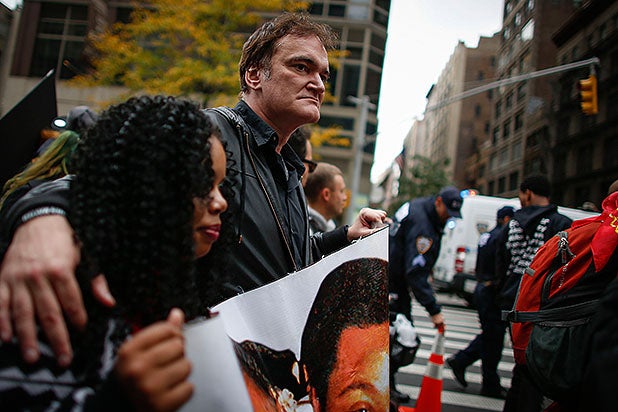 After a week of silence and rising police outrage, Quentin Tarantino has let colleagues know he intends to apologize for his comments calling police officers “murderers,” TheWrap has learned.

The “Django Unchained” director has been under siege by police departments across the nation after he made the controversial comments at a rally in Manhattan against police brutality on Saturday, Oct. 24.

One police union after another has boycotted Tarantino, and by Friday protests reached a crescendo with the National Association of Police Organizations — a group representing 1,000 police units and associations and over 241,000 sworn law enforcement officers — calling for a total boycott of his films, including the upcoming “Hateful Eight.”

On Sunday, Jamie Foxx threw his support behind the director at The Hollywood Film Awards,where he introduced the cast of “The Hateful Eight,” which will be out in December.

“Keep telling the truth and don’t worry about none of the haters,” Foxx said at the Beverly Hilton. Tarantino was not present at the awards show.

But an individual with knowledge of the situation said the director is planning to explain his comments in an opinion piece and apologize to those who were offended. The exact time and media outlet will be decided by the director, the individual said.

That would certainly be a welcome move to Harvey Weinstein, the co-chairman of The Weinstein Company, who is distributing Tarantino’s film and has a relationship with the director that stretches back more than two decades. Weinstein is also a prominent figure in New York City and active in city politics.

Thus far TWC  has declined to comment on the situation.

The initial protest was held in Washington Square Park four days after NYPD Officer Randolph Holder was fatally shot in the head while chasing a gunman in East Harlem. When asked about the timing of the rally, Tarantino called it “unfortunate.”

It didn’t take long for the law enforcement community to take the Oscar-winning writer and director to task, and call for a boycott of his future films.

“New Yorkers need to send a message to this purveyor of degeneracy that he has no business coming to our city to peddle his slanderous ‘Cop Fiction.’ It’s time for a boycott of ‘s films,” Patrick Lynch, president of the Patrolmen’s Benevolent Association said in a statement the day after the protest.

And NAPO on Friday wrote: “We ask officers to stop working special assignments or off-duty jobs, such as providing security, traffic control or technical advice for any of Tarantino’s projects.”

As the director prepares to release his Western “The Hateful Eight,” pressure has grown for him to issue an apology.