The network’s decision to greenlight another season of "Castle" marks a big turning point. While serialized dramas such as "Grey’s Anatomy" and "Brothers & Sisters" have come almost easily to ABC, finding repeatable procedural dramas that work has seemed to be all but impossible for the network. 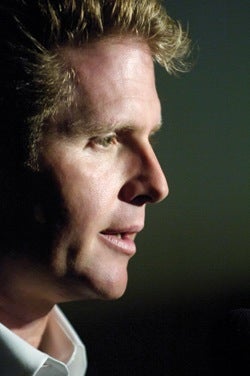 But now, with "Castle" a hit, ABC seems to have gotten the procedural monkey off its back. TV MoJoe caught up with ABC chief Steve McPherson Tuesday to check in on the day’s events:

It’s rare these days that shows grow into hits as opposed to simply launching successfully out of the box. "Castle" is clearly in the former camp?
We all believed, on both the production side and the network side, we believed in the creative on this show from the get-go. We loved the casting, we loved Andrew (Marlowe, executive producer) and the work he was doing on the story-telling. It’s a great story of patience. It’s good to see the ability of broadcast networks to be patient when they can.

What have viewers responded to with "Castle"?
There’s a certain amount of alchemy that goes into any kind of show. Our procedurals are always going to have to have a big character element. But I think the mystery and the play-along storytelling and certainly the chemistry (of the stars) is a big part, too.

Have the showrunners been good at working with you to bring up the ratings?
They’ve been fantastic collaborators. They’re very reactive, whether it’s ripped from the headlines stuff or the Dana Delany two-part episode… they’ve been great at adjusting on the fly. One of the biggest things for this show is, it shows the power of what the ABC Entertainment Group can do. It’s been a great collaboration between the network and the studio, really working together. It’s a great example of success.

This is your first big procedural in a long time.
In terms of close-ended mystery storytelling, yes. The big goals for us going into this season. were procedural dramas that repeat and (boosting) 10 p.m. Those were a big goals for us, along with launching comedies. So that’s another check in the success box. There are a lot of positive things about this one.

Now that you’ve launched one successful close-ended procedural, does it get easier to find more?
Hopefully they become calling cards for us. Before "Modern Family" and "The Middle" and "Cougar Town," people had to take our word for it that we were going to really invest in comedy. Now they see it. People have always brought us the big, serialized ambitious out-there high-concept stuff. Now they know they can bring us this kind of fare as well.