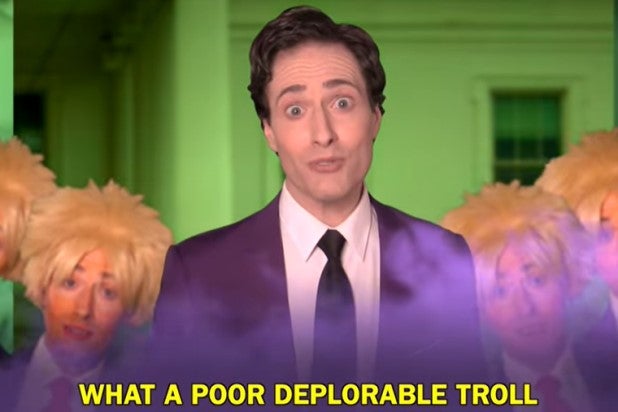 Randy Rainbow has a new parody, this time drawing from the Disney songbook to diss President Donald Trump.

“So here’s the latest. Your campaign kick-off rally in Oklahoma was a bomb. Miss Coronavirus is living her life thanks to your gross negligence. Your treasonous love affair with Putin has been exposed once again. And your makeup looks like s–t,” Rainbow begins, before breaking into song.

“Poor deplorable troll, how hard you try,” he sings in the chorus, borrowing a term Hillary Clinton used in a 2016 campaign speech to malign a segment Trump supporters.

Rainbow ends the song parodying Trump himself, where he dons an unkempt blond wig and orange makeup. He derides the president’s request to slow down coronavirus testing and his use of the divisive term “china virus.” In fact, Trump tweeted the term “china virus” a record four times on Monday, despite the fact that the alarming surge in domestic infections has occurred within the last few weeks — well after international travel restrictions were imposed.

Check out Randy Rainbow’s parody above and the original “Little Mermaid” below: