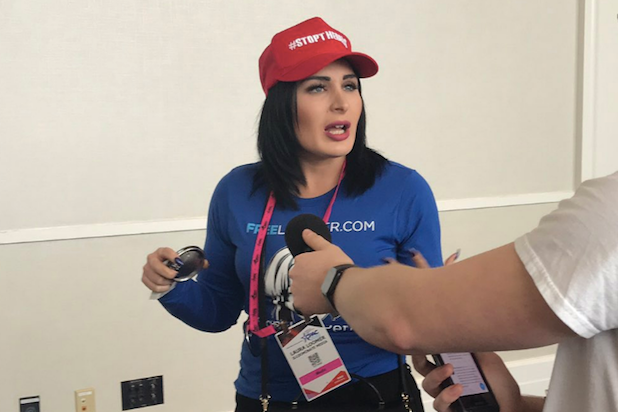 CPAC has revoked the press credential of Laura Loomer, a day after the right-wing activist heckled CNN reporter Oliver Darcy in a media area for the annual conservative gathering.

On Friday, Loomer, who received media credentials for the event as a representative of “Illoominate Media,” followed Darcy into CPAC’s media center heckled him with questions about internet censorship and social media bans, according to several witnesses. Loomer believes Darcy is at least partly responsible for her being banned by Twitter.

Loomer did not return to CPAC Saturday, and CPAC representative Ian Walters told TheWrap her press pass to cover the event had been revoked.

Loomer confirmed it, criticizing CPAC and Matt Schlapp, chairman of the American Conservative Union, which puts on the event.

“It’s egregious that CPAC and Matt Schlapp have decided to bow to the leftist outrage mob and ban one of President Trump’s most prominent supporters,” Loomer told TheWrap. “I am extremely offended an appalled that I’ve been banned by my own people. I came to support president Trump today and celebrate the great accomplishments that he’s made as president of the United States of America. I am extremely saddened as somebody who came here to raise awareness of social media biases that I am being censored by CPAC.”

Walters did not immediately respond to a request for additional comment.

Below is video of Loomer being turned away and her credential taken.

After Loomer left the media area Friday, TheWrap saw Loomer tell student activists that Darcy is a “p—y” and “beta b—-.”

“The reason why I confronted Oliver Darcy is because Oliver Darcy led a lobbying initiative as an employee of CNN to have Alex Jones de-platformed from Twitter,” she told TheWrap. “Oliver Darcy is a perpetual victim. He is constantly advocating for people to be banned and silenced. As a member of the media, Oliver Darcy should respect our First Amendment right.”

Loomer’s gripe with Darcy stems from a September 2018 incident on Capitol Hill when both he and InfoWars chief Alex Jones were on hand for the sworn testimony of Twitter boss Jack Dorsey. Jones confronted Darcy, insulted his appearance, and accusing him of trying to shut down his Twitter channel. Jones was permanently banned from the platform that same day.

Loomer was also banned from Twitter after she criticized Rep. Inhan Omar on Twitter, and attacked Islam as a religion in which homosexuals are oppressed” and “women are abused.”

Asked why she received a media credential, Matt Schlapp, chairman of the American Conservative Union, which puts on CPAC, replied: “I don’t know what you’re talking about.”

Jones later said in a video that Darcy is “the secret police captain, who admits he goes around and gets people like InfoWars taken off other platforms.” He added that “because we confronted that monster that has abused us and lied about us, attacked our speech, because of that they took us down.”

In the weeks before Jones’ removal from Twitter, the CNN media reporting team produced several articles documenting what they said were clear examples of Jones’ multiple violations of Twitter’s terms of service.

Loomer has a long history of attention-getting moves such as crashing the 2019 Women’s March in New York City and handcuffing herself to Twitter’s New York City headquarters to protest her ban. She first came to wide public attention after disrupting a “Shakespeare in the Park” performance in New York which depicted a Trump-inspired Julius Caesar being stabbed to death.