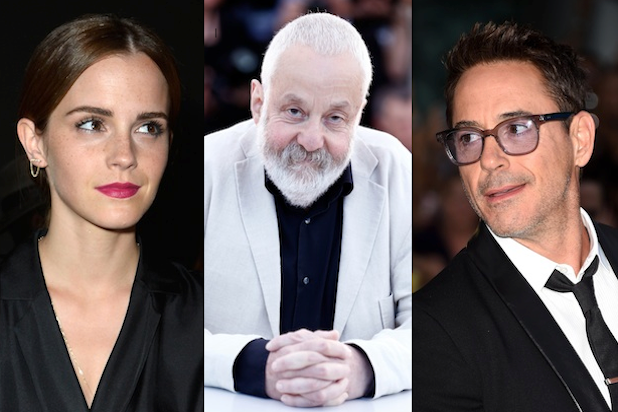 The awards will be handed out at a ceremony hosted by comic and actor Rob Brydon at the Beverly Hilton Hotel on Oct. 30. The show will be broadcast on BBC America on Nov. 2.

Robert Downey Jr., who currently stars in “The Judge” after a lucrative run in the and “Avengers” movies, will receive the Stanley Kubrick Britannia Award for Excellence in Film. Last year’s recipient was George Clooney, with the award going to Jeff Bridges, Tom Cruise, Daniel Day Lewis, Robert De Niro and Steven Spielberg in prior years.

Emma Watson will receive the Britannia Award for British Artist of the Year, after a year in which the “Harry Potter” actress’ most notable role was alongside Russell Crowe in Darren Aronofsky’s “Noah.” At 24 she is the youngest person to receive the award, which in the past has gone to Daniel Craig, Kate Winslet, Tilda Swinton and Helena Bonham Carter, among others.

Mark Ruffalo, who co-stars with Channing Tatum and Steve Carell in Bennett Miller’s “Foxcatcher,” will receive the Britannia Humanitarian Award not for his acting, but for his work with the non-profit Water Defense organization, which attempts to keep water sources free from industrial contamination.

On the eve of the U.S. release of his acclaimed film “Mr. Turner,” which won Timothy Spall the best-actor award at this year’s Cannes Film Festival, Mike Leigh will receive the John Schlesinger Britannia Award for Excellence in Directing. Past recipients include Kathryn Bigelow, Quentin Tarantino and Christopher Nolan.

Dame Judi Dench, who won a BAFTA Award for Most Promising Newcomer in 1965 and in 2014 appeared in “The Second Best Exotic Marigold Hotel” and “Tulip Fever,” will receive the Albert R. Broccoli Britannia Award for Worldwide Contributions to Entertainment, a honor reserved for, in BAFTA’s words, “iconic and trail-blazing individuals.” Ben Kingsley, John Lasseter and Kirk Douglas are among the past winners.

The Britannia Awards were established in 1989 and have gone to more than 60 individuals and organizations since then, with slightly more than half of the recipients being British.