After proving he’s still got the live-action touch with the modestly budgeted “Flight,” Robert Zemeckis may soon be back in the tentpole business, as he’s in negotiations to direct Lionsgate’s latest young-adult sci-fi movie “Chaos Walking,” multiple individuals familiar with the project have told TheWrap.

The Oscar-winning filmmaker has spent the last several months weighing the possibility of tackling “Chaos Walking,” which Oscar-winning screenwriter Charlie Kaufman is adapting from Patrick Ness’ bestselling young-adult trilogy. An individual familiar with Zemeckis’ plans confirms he’s in negotiations but cautions that no deal is in place — though a studio insider is optimistic one could close before the end of the month.

Story is set in a dystopian future where humans have colonized a distant Earth-like planet. When an infection called the Noise suddenly makes all thought audible, privacy vanishes and chaos ensues, leading a corrupt autocrat to threaten to take control of the human settlements and wage war with the indigenous alien race. 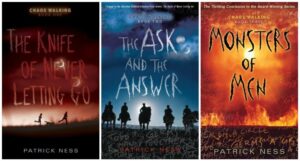 Doug Davison (“Oldboy”) is producing through his Quadrant Pictures banner along with Allison Shearmur (“Cinderella”).

With “The Hunger Games” coming to a close in 2015, Lionsgate has high hopes for “Chaos Walking” and believes the project has the potential to launch another teen-friendly sci-fi franchise in the vein of “The Hunger Games” and “Divergent.” Unlike those series and “Twilight,” however, the protagonist in “Chaos Walking” is a young male, Todd Hewitt, who holds the key to stopping planet-wide destruction and saving mankind.

Ness’ “Chaos Walking” series features three books — 2008’s “The Knife of Never Letting Go,” 2009’s “The Ask and the Answer” and 2010’s “Monsters of Men.” The author’s latest YA book, “More Than This,” was published on Tuesday by Candlewick Press.

“Flight” soared in theaters, grossing $161 million worldwide on a $31 million budget, and marked a return to live-action filmmaking after Zemeckis spent years directing motion-capture animated films such as “Beowulf,” “The Polar Express” and “A Christmas Carol” — as well as producing “Mars Needs Moms.”

Recently, Zemeckis and his ImageMovers partner Jack Rapke have been developing an adaptation of Elizabeth L. Silver’s murder mystery novel “The Execution of Noa P. Singleton” and Nathaniel Halpern’s script “Rose,” which is set up at Focus Features.

Zemeckis is the Oscar-winning director of “Forrest Gump,” as well as “Back to the Future,” “Cast Away” and “Who Framed Roger Rabbit.” Zemeckis, who left CAA in April, is represented by attorney Cheryl Snow.