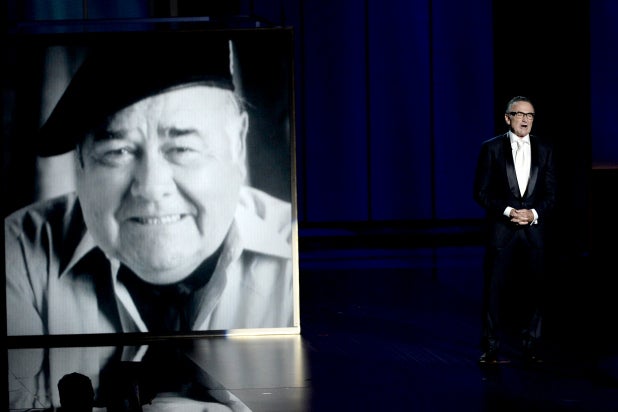 The 66th annual Emmy Awards will remember Robin Williams with a “proper and meaningful remembrance,” executive producer Don Mischer said in a statement on Wednesday.

“Plans for the In Memoriam segment are in discussion,” Mischer said. “While we are all still coming to terms with this week’s tragic news, we are working to give the proper and meaningful remembrance he so well deserves.”

Williams played a key role in last year’s Emmys In Memoriam segment, which took on a controversial new format. The “Crazy Ones” star honored his idol, Jonathan Winters (segment pictured above).

In addition to the usual tribute montage to those who died over the past year, five individuals were celebrated separately. Along with Winters, the segment honored “Sopranos” star , “Glee” actor , “Family Ties” producer ,  and “All in the Family” cast member . , and paid tribute to those stars, respectively.

The decision to single out those five in somewhat lengthy segments did not sit well with many in and out of the industry. To some, the choices felt a little too much like a popularity contest. One critic was ‘s son, who questioned the breakout tribute to , who died from a heroin overdose. Others lamented “Dallas” star Larry Hagman‘s omission.

Details for the Williams’ tribute are still being worked out after he was found dead of an apparent suicide on Monday.

The Oscar winner was discovered in his Tiburon, Calif. home “with a belt secured around his neck, with the other end of the belt wedged between the closed closet door and door frame,” Marin County’s assistant chief deputy coroner Lt. Keith Boyd said Tuesday during a press conference in San Rafael, Calif.