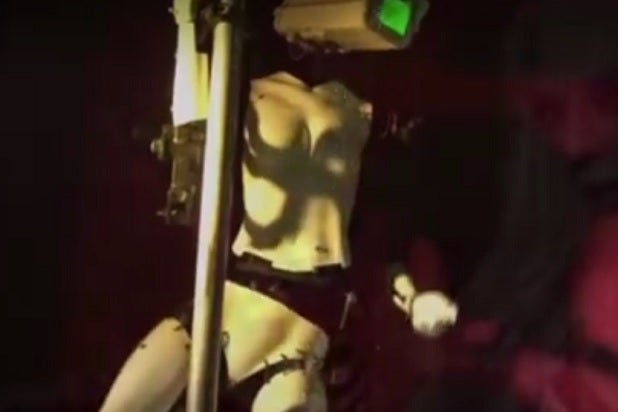 Gentlemen, now taking the center stage, please give it up for Roooomba!

The trend toward automation has taken a disturbing if potentially sexy turn, with the news that robot exotic dancers will be working the poles in Las Vegas during this year’s International Consumer Electronics Show (CES), which is scheduled to kick off in Sin City next week.

“Since their inception, robots have been used to make humans’ lives easier. These days it seems robots can do anything from vacuuming the floor to exploring another planet to building a car or diffusing a bomb,” Sapphire said on its website. “But now the game has changed, as a robot has been developed strictly for one’s personal entertainment.”

According to the club, the “fully animated robot electronic twins — dubbed #R2DoubleD and #TripleCPU — were brought in from London for CES, and “are excited to make their Vegas debut.”

Welcome to a brave new world, gentlemen. Just be careful if you plan to make it rain at the club — you don’t want to cause any short-circuits.

Can’t make the trip to Vegas next week? Watch #R2DoubleD and #TripleCPU work the poles in the video.