Elton John is one of the biggest names in music, but of course, Elton John’s name wasn’t always Elton John. He was born Reginald Dwight, and the biopic “Rocketman” suggests that Dwight got his stage name from his bandmate Elton Dean and Beatles singer John Lennon.

Unfortunately, that’s not quite the case. In an interview for his CD box set “To Be Continued…” (1990), John explained where he got the idea for his stage name.

“I was in Bluesology, and we were coming back from a Long John Baldry gig somewhere, and we got a bus from London airport to London and someone said, ‘We’ve made it now, so what are you going to call yourself?'” he explained. “The saxophone player in the band was called Elton Dean, a very good jazz sax player, and the only other Elton I could think of was Elton Hayes, who recorded the song ‘The Owl and the Pussycat.’ So I took ‘Elton’ from Elton Dean and ‘John’ from Long John Baldry. I wanted to choose a name that nobody had, and it was as quick as that.”

In the film, John (played by Taron Egerton) is in a small bus following a gig when, indeed, he asks Elton Dean how he would feel if he took his first name. There’s some reluctance, but John doesn’t care. Later, when he’s in a music producer’s office, he’s asked for his last name, at which point John looks up to a Beatles record on the wall and zeroes in on John Lennon — hence, Elton John is born.

“I really became Elton John at the Troubadour club (in Los Angeles) that first night,” John continued in the interview for his box set. “I was Elton John before that, but that was when I really launched into Elton John. After that, there was no holding me back, in a lot of senses.”

So there you have it, folks. Elton John did not get his last name from John Lennon.

See below for John’s entire statement regarding his stage name. 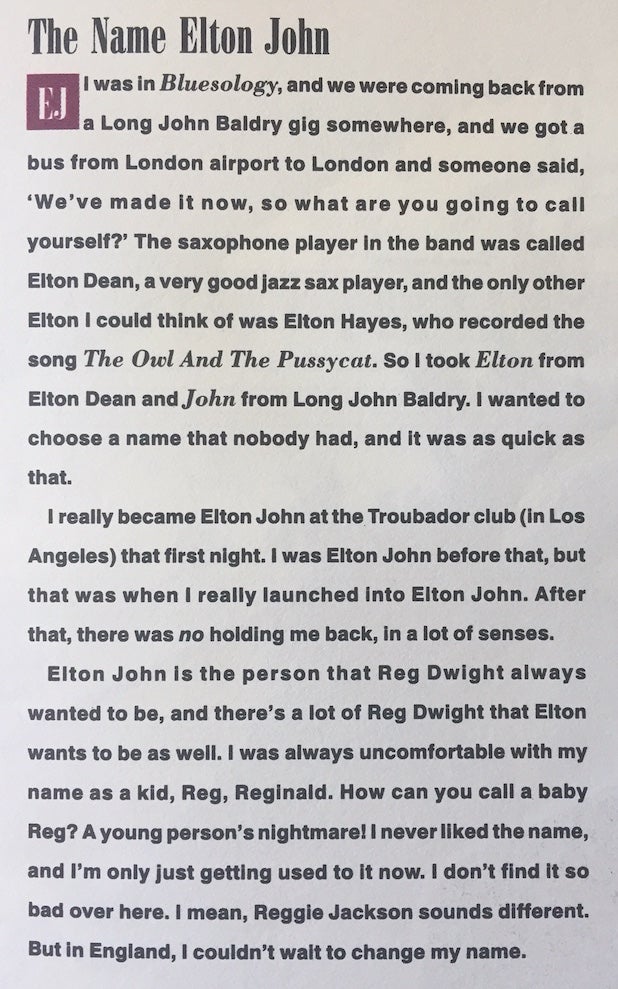