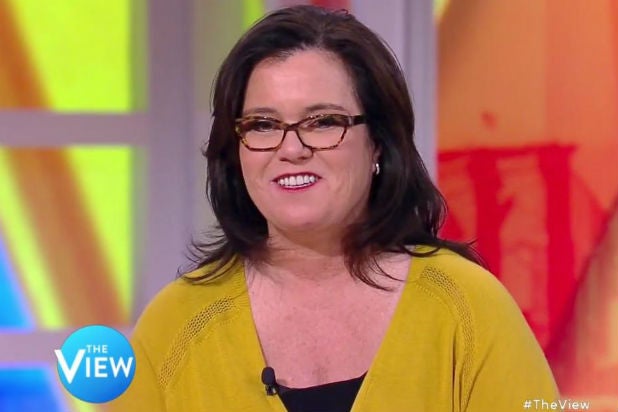 Rosie O’Donnell is leaving “The View” after just five months to focus on her family.

“I can confirm that Rosie and her wife Michelle split in November,” O’Donnell’s representative told TheWrap in a statement. “Rosie has teens and an infant at home that need her attention. This has been a very stressful situation. She is putting her personal health and family first. ABC has been wonderfully understanding and supportive of her personal decision to leave ‘The View.’ Next week will be her last.”

ABC said it “respected and understood” the comedian and actress’ desire to be with her family amid the breakup from her wife.

“Rosie is an immensely talented star who comes in each and every morning brimming with ideas, excitement and passion for the show,” an ABC rep told TheWrap. “When she told us that she wanted to exit ‘The View,’ we respected and understood her desire to put her well-being and her family first. We’re delighted she’s still part of the ABC family with upcoming guest appearances on ‘The Fosters.’ And we know she’ll return to ‘The View’ often with her unique point of view and updates on her work and her family.”

O’Donnell initially joined “The View” in 2006, gaining a reputation with her outspoken manner and liberal views. She left the following year. In the summer of 2014, the network announced she would return to a panel that included Whoopi Goldberg, Nicolle Wallace and Rosie Perez.

O’Donnell’s sudden departure from the daytime show follows reports of ABC’s plan to replace co-host Rosie Perez. Last month while Perez was rehearsing for Larry David‘s Broadway play, “Fish in the Dark,” reports surfaced that she wouldn’t return from the hiatus and that ABC was looking to replace her with hosts with youth appeal. Among ABC’s short list for replacements were “Orange Is the New Black” star LaVerne Cox and “Glee” alum Naya Rivera.

“The View” has found its ratings have remained flat while CBS’s “The Talk” has nipped at its heels. Last month while Perez and Goldberg, on leave for a back issue, were away, “The Talk” beat the ABC program in total viewers for the first time in its 18-season history — 2.95 million vs. 2.88 million, respectively.

O’Donnell’s departure is the latest in a series of seemingly endless shakeups for the daytime talker. Jenny McCarthy and Sherri Shepherd departed “The View” at the end of last season. McCarthy had barely been on the show one season before she left the show.