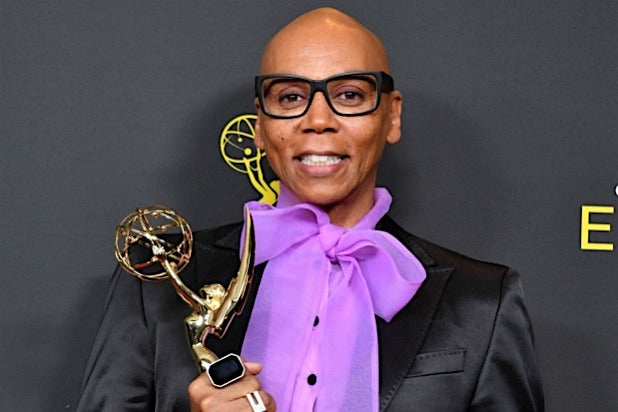 RuPaul’s win at the Creative Arts Emmys for reality host Saturday tied him with “Survivor” host Jeff Probst for most wins ever in the category — each has four.

RuPaul said backstage that he was so excited, he had no words to express his happiness.
“I don’t know how I feel because my brain is not connected to any other part of my body right now,” he joked.

He also explained how he chose his outfit for the night — a smart black suit and purple pussy bow.
“I wanted to do a pussy bow because I love a pussy how. … especially the fact that I get to say pussy bow.” Then he kept saying “pussy bow.”

Probst won the first four awards from 2008-2011 for hosting “Survivor,” and RuPaul has won the last four for “RuPaul’s Drag Race,” for the last four years.

In between them, Jane Lynch (“Hollywood Game Night”) has won twice, Tom Bergeron (“Dancing With the Stars”) once, and Heidi Klum & Tim Gunn (“Project Runway”) once.
RuPaul beat out Ellen DeGeneres, Amy Poehler and Nick Offerman, Maria Kondo, and James Corden on Saturday.