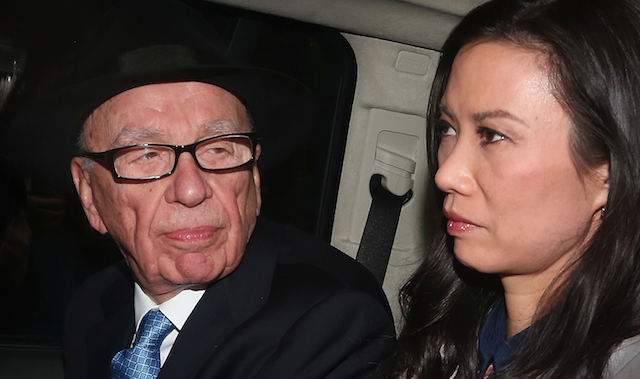 Rupert Murdoch's divorce from Wendi Deng Murdoch will do nothing to weaken the media mogul's hold on News Corp., according to an individual with knowledge of the company.

The Murdochs' pre-nuptial agreement does not grant Wendi Deng Murdoch any voting shares in News Corp. as part of a settlement.

Financial terms of that agreement were not immediately available.

The couple's daughters, Grace, 11, and Chloe, 9, do not have voting shares, the individual said.

Grace and Chloe do have 8.73 million class A non-voting shares in the company administered by a family trust, according to a report in the Financial Times.

The individual said the divorce will have "zero impact" on the business and shot down any connections between the timing of the filing and News Corp.'s pending split into two separate, publicly-traded companies.

One company, 21st Century Fox, will be comprised of television and film holdings. The other, News Corp., will house publishing and education assets. Stockholders approved the split on Tuesday.

Murdoch will serve as chairman and CEO of the proposed 21st Century Fox and executive chairman of the new News Corp.

Rupert Murdoch and Wendi Deng Murdoch met in 1997 and were married in 1999. It is Rupert Murdoch's third marriage.

Murdoch's divorce from his previous wife Anna proved costly. The dissolution of their 32-year marriage was considered at the time to be the most expensive divorce in history.