This weekend’s record-breaking $55.5 million blast-off for the space thriller “Gravity” was the biggest box-office opening ever for Oscar winners Sandra Bullock and George Clooney, but the real star may have been the movie’s spectacular 3D imagery.

Warner Bros. marketers pitched moviegoers the idea that the best way to see the the thriller from director Alfonso Cuaron — whose dynamic camera work and visual style have been the hallmarks of films like “Y Tu Mama Tambien” and “Children of Men” — was in 3D or on Imax.  And the studio stacked the deck by offering 3D — with a roughly $3 or $4 ticket surcharge — at 3,150 of 3,575 theaters in which it played, as well as 323 Imax screens.

It paid off. The $44 million in grosses from 3D represented 80 percent of the overall haul. Imax screens, which are also 3D, brought in $11.2 million, or 20 percent of the total receipts, the highest percentage ever for an opening of more than $50 million. The story was the same overseas, where 70 percent of the $27.4 million that “Gravity” brought in from 27 foreign markets came from 3D.

“We knew we were going to do well this weekend,” Warner Bros.’ head of distribution Dan Fellman told TheWrap, “but this surprised us.” Analysts had projected a $40 million start, but surging social-media buzz as the weekend drew near suggested something bigger.

The 3D numbers for “Gravity” top those of two other movies known for groundbreaking visuals. Last year, the format accounted for 68 percent of its $24 million opening of Ang Lee’s “Life of Pi,” and 3D sales made up 72 percent of the $77 million opening of James Cameron’s “Avatar” in 2009.

Rave reviews for the Oscar hopeful – it’s a 98 percent positive on Rotten Tomatoes – were another box-office booster as “Gravity” soared to the best October debut ever, eclipsing the $52 million scared up by “Paranormal 3” n 2011. Moviegoers agreed with the critics, and gave it an “A-” CinemaScore.

“Gravity” attracted an audience that was 54 percent male and 59 percent over the age of 35. The latter number, combined with strong CinemaScore and reviews which should build word of mouth, suggest it could play strongly through the awards season.

The opening for “Gravity” was the best ever for the two leads. It easily beat the $39 million Bullock’s “The Heat” debuted with this summer and the $42 million that Clooney’s “Batman and Robin’ opened to way back in 1997.

Warner Bros. picked up “Gravity,” which tells the tale of two astronauts stranded in space when their shuttle is damaged, after Universal put it in turnaround. Cuaron and producer David Heyman, who worked with Warner Bros. on the Harry Potter movies, brought the project to the studio, which puts the production budget at $80 million.

Last week’s No. 1 movie, Sony’s “Cloudy With a Chance of Mpeatballs,” was a distant second with $21 million.  The week’s other wide opener, the Justin Timberlake-Ben Affleck thriller “Runner Runner,” was overwhelmed and took in just $7.6 million.

Despite the pairing of Affleck, recently chosen to play Batman in Zack Snyder’s “Man of Steel” sequel, and the pop star Timberlake, domestic expectations were low for New Regency’s $30 million gambling thriller. But with this weekend’s grosses, it’s brought in $23.5 million from overseas and has worldwide total of $31.1 million for distributor Fox.

Three movies in their second week of release followed.

Universal’s Ron Howard-directed racing drama “Rush” brought in $4.4 million and to up its domestic total to $18 million. Relativity’s Joseph Gordon-Levitt sex comedy “Don Jon” is at $16 million after adding around $4 million this weekend. And Fox Searchlight’s comedy “Baggage Claim” was also just over $4 million for the weekend and has taken in $15.1 million overall.

The partly Spanish-language “Pulling Strings,” from Lionsgate’s Pantelion Entertainment, opened to $2.5 million from 387 theaters for a solid per-theater average of $6,460.

Pantelion is the company behind “Instructions Not Included,” the comedy that last month became the highest-grossing Spanish-language movie ever in the United States.

Fox Searchlight’s “Enough Said” cracked the top ten this weekend, grossing $2.1 million. The overall domestic total of the film after 19 days is $5.4 million. It was written and directed by Nicole Holofcener and stars Julia Louis-Dreyfus, James Gandolfini, Toni Collette, and Kathryn Keener. 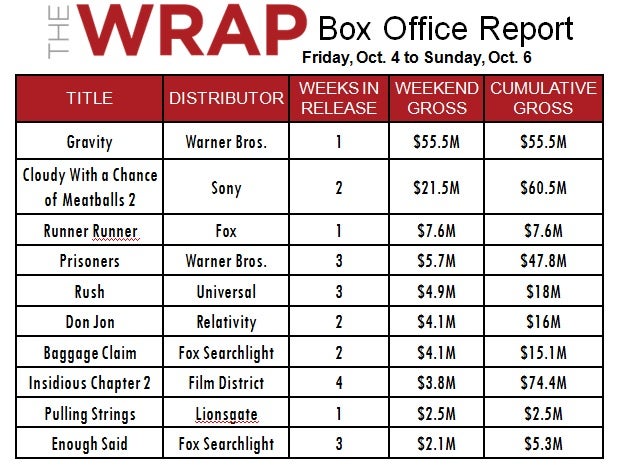