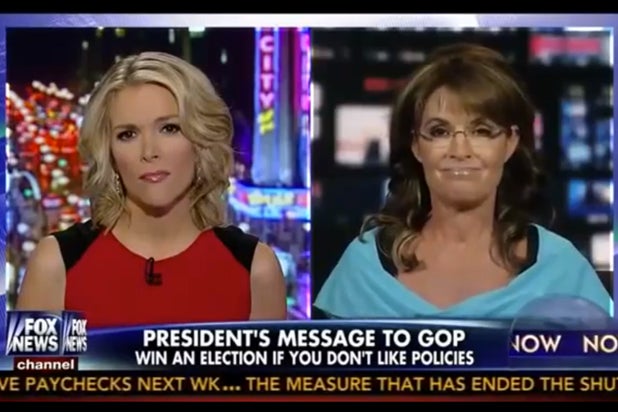 Kelly asked Palin if she agreed with President Obama’s statement that the shutdown has hurt America’s credibility with the rest of the world more than anything else.

Palin did not. “I think that remark is one of his more out of touch remarks that we’ve heard in recent days,” she began.

And then she went with this:

What emboldened our enemies and empowered our competitors was his promise to transform America from a solvent, free exceptional country into something that we’re not gonna recognize. Also what has emboldened enemies is he with doubling our debt since he’s been elected, putting on a path towards bankruptcy and then locking up pipelines and resources that will result in us being more reliant on foreign imports for energy, and then of course he, having left behind, his administration having left behind our brave men in Benghazi to be murdered, and then of course there’s Syria, where he promised to bomb Syria because in that civil war, Syria was going to bomb Syria, and then we never heard another word again about his threat to bomb in a foreign civil war, and then of course most recently Megyn, he using our military, those who would fight against our enemies our military our vets, shutting down their memorials and holding them hostage in terms of budget deals, threatening to withhold paychecks for our brave men and women –

A minute in, Kelly finally got a word in to try to focus Palin’s freewheeling remarks on what Republicans can do next to ensure that they maintain control of the House of Representatives in the next election. Instead, Palin explained that the Tea Party stood for “Taxed Enough Already” and “we are energized” to oppose Obama’s “unsustainable spending spree.”

Kelly noted that Palin has recently voiced her support to challengers of Republican incumbents. Palin said it was part of her support of “robust” primaries that help candidates “express more articulately what their record is and what their intentions for our country is.”

“The enemy of the enemy is my friend, is any commonsense conservative’s friend,” Palin concluded. “Otherwise, we’re going down.”