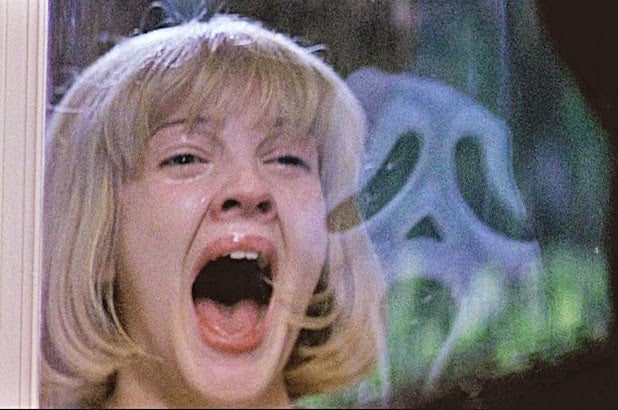 Drew Barrymore says that caller ID use in the U.S. tripled after “Scream” was released in 1996 — and she would know, because her character might’ve survived past 10 minutes if she had it.

“Scream,” Wes Craven’s meta-horror satire and classic, was CBS’ Sunday night movie screening, and Barrymore hosted a reunion of the film and its sequels. And in addition to some fun cast interviews, a lot of the stars of the film live-tweeted Sunday night with some of their own trivia. Here’s just a few of the nuggets that were revealed as everyone had a night in with Ghostface.

David Arquette said in a tweet that director Craven paid such close attention to details that he asks many of the people in the cast to wear black boots to lend to the suspicion that any character could be the killer.

Arquette even added that Craven wanted Dewey to still live at home and to be able to answer the phone in order to further create the possibility that his character could be a suspect.

“It’s all in the details,” Barrymore tweeted.

As for the real Ghostface, the killer is voiced by actor Roger L. Jackson, but Craven never let the cast meet him, and Arquette says he still hasn’t met Jackson to this day.

Wes never let us meet Roger L. Jackson the voice of #Ghostface despite him being on set and on the phone for the calls. I haven’t met him to this day #drewsmovienite #scream @DrewBarrymore @DrewBarrymoreTV @CBS

David Arquette was supposed to die in the first film

Arquette says he has Super 8 behind the scenes footage of the final scene in the movie with the whole cast present, and he revealed that Craven ultimately put him in the final scene to keep him alive, whereas in the original script, he was meant to be killed.

As a result, Arquette has now reprised his role of Dewey Riley across four “Scream” films and will do so again in the fifth that’s filming now. What’s worse, he says people to this day still refer to him as “Doofy,” or his character from the “Scream” parodies “Scary Movie.”

“I felt like such the old guy at this party scene – imagine how I felt on the new set. Now that’s scary,” he said in a tweet. “Dewey wants to be tough like Clint Eastwood but just isn’t.”

Henry Winkler was asked to “scream a little louder”

Henry Winkler, who plays Principal Himbry in the first “Scream” but is actually uncredited for the film, said that Craven asked him to “scream a little louder” during his death scene, requiring the crew to reset the tubes gushing blood from inside his shirt after he’s stabbed in the back.

“I can do that,” he remembers saying enthusiastically.

RIP Principal Himbry 😭 @hwinkler4real shares what his character would be up to right now if he wasn't killed by Ghostface #DrewsMovieNite pic.twitter.com/e3QAYdiT33

And if you didn’t already know that Winkler was the nicest, turns out Arquette was a real fan.

“I met @hwinkler4real on the set and told him how much it meaned [sic] to me that he shook my hands years before after a live taping of ‘Happy Days’ and he said ‘I’d like to shake your hand again,'” Arquette wrote in a tweet. “He had a lasting impression on me on how to be kind.”

W. Earl Brown, who plays Courtenay Cox’s camera man in the film, says that when his throat was slit in the original “Scream,” his death was so gruesome that the ratings board actually slapped the film with an X-rating, requiring Craven to trim a few frames of bloodshed in order to land it with an R-rating instead.

But Brown added that there was an actually dangerous stunt on set for the “Windshield of Blood” scene, as he describes it.

“The driver had not properly prepped. It was such a dangerous shot that she should have gone half speed. She did not,” Brown wrote in a tweet thread. “The camera inside fell over backward. On the roof, I went flying over the side, headfirst. Luckily our stunt coordinator had tied one of my ankles to the roof rack. He was up there with me to help lower my body. I grabbed a windshield wiper and he held onto my belt. Luckily I didn’t actually get thrown off the roof, but I came terrifyingly close.”

From the looks of it though, Brown still had a blast on the “Scream” set, describing hanging out late nights during shoots and even skinny dipping in a closed pool under a full moon.

The first take on The Windshield Of Blood scene, the driver had not properly prepped. It was such a dangerous shot that she should have gone half speed. She did not — she tromped it…