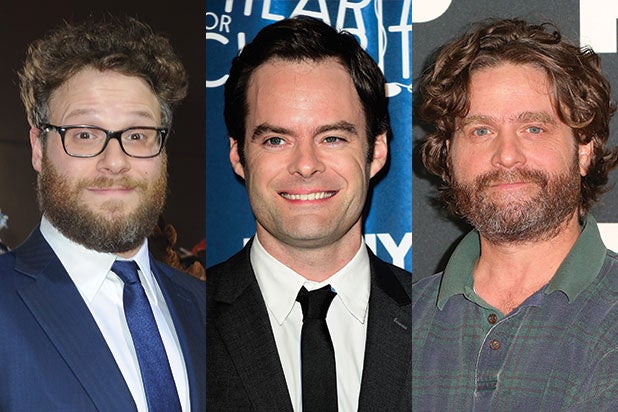 Seth Rogen, Bill Hader and Zach Galifianakis are set to star in “The Something,” TheWrap has learned.

Rodney Rothman, who wrote the script for “22 Jump Street,” will write, direct and produce the comedy, while Rogen’s company, Point Grey Pictures, is producing along with Good Universe. Universal pictures will distribute.

“The Something” centers on a group of male astronauts who are stuck in space for several years before they come upon another ship. It will serve as Rothman’s directorial debut.

Rogen and Hader have filmed several movies together, including “Pineapple Express,” “Superbad” and “Knocked Up.” Rogen’s recent credits include “Steve Jobs” and “The Night Before,” and he will be seen on screen opposite Zac Efron in “Neighbors 2” on May 20.

Hader’s projects range from “Trainwreck” to “Inside Out,” and he will star in the upcoming “Angry Birds Movie” and “The BFG.”

Also Read: Why Seth Rogen, Evan Goldberg Made 'Preacher': We're Not Doing 'Stupid Stuff for a While'

Galifianakis‘ recent credits include “Birdman” and “Muppets Most Wanted.” He is currently filming “Keeping Up With the Joneses” and is voicing the Joker in “The Lego Batman Movie.”