Los Angeles Times editorial pages editor Sewell Chan is exiting the company to lead the Texas Tribune as its new editor in chief. His last day with the Times will be Sept. 3 and he is expected to move to Austin and begin his new role in October.

The Times announced his departure Thursday, as did Chan himself. He asked on Twitter, “I’m joining @TexasTribune and moving to Austin! I need your help preparing. What should I read and who should I follow?”

The Tribune’s previous editorial director Stacy-Marie Ishmael departed earlier this year, citing burnout, and the paper has been on the hunt for a replacement since. 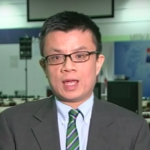 “I want to thank Sewell for being ‘all in’ and approaching each team he worked with and project he took on with urgency, curiosity and professionalism,” the Times’ owner, Dr. Patrick Soon-Shiong, said in an email to staff Thursday that was then reported by the Times itself.

“I love the L.A. Times and feel more optimistic than ever about its future,” Chan told the Times. “I’ve been proud of all the work my team has done, but the opportunity to direct the work in a state that is going to be politically pivotal — with such issues as voting rights, climate change, demographics, technology and abortion rights — seemed too good to pass up.”

Evan Smith, CEO and co-founder of the Tribune, wrote a letter welcoming Chan to the nonprofit, calling him “a catch” and his hiring “a coup.”

“Sewell was one of several exceptionally strong applicants to emerge from our national search for a newsroom leader,” wrote Smith. “A visionary journalist with a commitment to innovation, he has a sophisticated sense of the relationship between civic engagement and a healthy democracy — never more important than in a moment when more Texans than ever are clamoring for reliable, credible nonpartisan journalism. He’s terrific at every aspect of the job, from writing and editing and to inspiring and marshaling the troops. By reputation, he outworks everyone in our business. We’re so excited to have a steady hand on the wheel and a fresh set of eyes on everything we do and how we do it.”