For those keeping score at home, “Shin Godzilla” marks the third reboot (the title is Japanese for “Godzilla resurgence”) of Toho Studios’ legendary city-destroying monster, and that’s not even counting the regrettable U.S. versions. (In a nutshell: the original 1954-1975 movies fit in what’s known as the “Showa” period, followed by the “Heisei” era of 1984-1995 and the “Millennium” films of 1999-2004.)

In clearing the decks again on this iconic character, writer-director Hideaki Anno (“Evangelion”) and co-director Shinji Higuchi have taken a more realistic, nuts-and-bolts approach to the eternal question: How do you solve a problem like Godzilla? If the original 1954 “Gojira” was a metaphor about the atomic bomb and the destruction it visited upon Japan, “Shin Godzilla” feels very much like a post-9/11-and-Fukushima movie that ventures into nearly “Veep”-ian levels of political satire.

Anno’s Japan does not leap into action with solutions and strategies like the heroes of previous films; instead, meetings are called and conferences are arranged, usually to organize more meetings and more conferences. Bucks are passed, and rigid protocols are followed, to the extent that no agencies seem willing or able to do anything for the citizenry; we’ve seen this sort of decorum before, but in the previous movies, eventually somebody springs into action. (“Shin Godzilla” constantly leaps from one agency to the next, and the on-screen chirons introducing new bureaucrats become hilarious with repetition.) 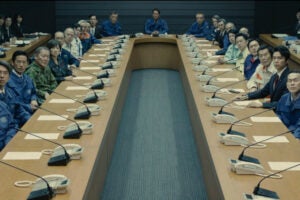 All this government non-response happens after unidentified steam eruptions in the bay cause a leak in an underwater highway tunnel. It soon becomes clear that these eruptions are biological and not geological, and that they’re caused by a large creature that makes it to land (despite government experts’ insistence that the monster won’t be able to support its own weight outside of water), only to begin evolving before everyone’s eyes.

Godzilla’s progress here follows the character’s evolution over the course of his cinematic career: He starts out as an ungainly, puppet-eyed beast but soon metamorphoses into a digitally rendered and more recognizable version of the Big G that we’ve come to know and love over the years. But this is not the “friend to children” Godzilla; this thing turns purple with radiation and emits a beam that decimates cities in an instant.

The UN — led by the U.S., Russia and China — wants to nuke it, despite Japan’s tragic history with the bomb, and it’s up to a renegade group of “scientists, nerds and pains-in-the-bureaucracy” (as the film calls them) to come up with an alternate solution. This crew is led by Rando Yaguchi (Hiroki Hasegawa, “Why Don’t You Play in Hell?”), the one person in the movie who’s cursed with having the right answer at every turn, even though it takes forever for his bosses to acknowledge this.

The key to making a great “Godzilla” movie is to provide more than just exciting monster sequences; there has to be something interesting happening when the title character is off screen. (The most recent U.S. version was so frequently ho-hum because the love story and human derring-do were so uninvolving.) “Shin Godzilla” makes great points about how unprepared governments are to deal with mass evacuations and enormous disasters. (Don’t forget that it took 9/11 to make New York City realize that its fire and police departments couldn’t communicate with each other because they were on different radio networks.)

The editing (by Anno and Atsuki Sato) expertly jumps between institutional foot-draggers, renegade scientists and the panic in the streets; the movie could probably stand to be about 15 to 20 minutes shorter, but at least the action keeps hopping. And when Godzilla does his thing, it’s always terrifying — the destruction here is chillingly realistic and far removed from the crumbling cardboard skyscrapers of yore.

There’s one strange casting flaw: Satomi Ishihara (“Attack on Titan”) plays a Japanese-American representative of the U.S. government who was raised stateside and is not always on top of Japanese customs. When she speaks English, however, it’s clear that it isn’t her first language, a distraction for English-speaking audiences. (This same issue comes up in Jia Zhangke’s “Mountains May Depart.”)

Godzilla fans have no doubt already bought their tickets for the U.S. limited run of this latest adventure, but film fans who have foolishly dismissed the kaiju genre for being childish and simplistic may find themselves compelled by the ideas “Shin Godzilla” has to offer. Come for the city-flattening; stay for the political satire.