Sky, a pan-European satellite broadcasting, on-demand internet streaming media, broadband and telephone services company, is feeling like the belle of the ball — and shareholders are enjoying its popularity.

Stock for Sky is trading up more than 21 percent per share on news of Comcast’s mammoth $31 billion bid for the UK media giant. A snapshot is below; we chose a 5-day outlook to emphasize the dramatic rise this morning. 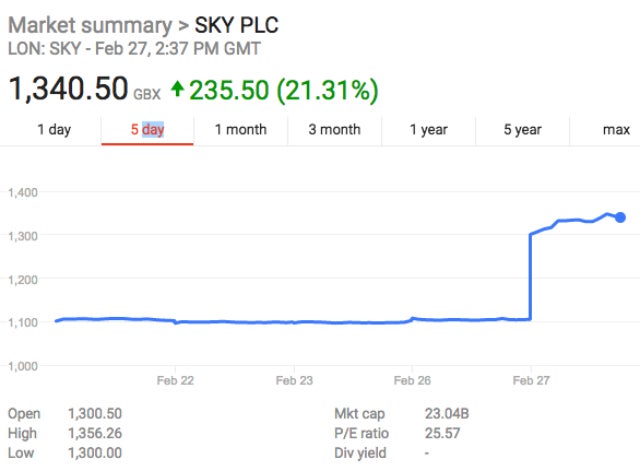 Meanwhile, Comcast’s stock is down almost 6 percent. That’s not atypical when a company pledges an enormous amount of money for M&A. 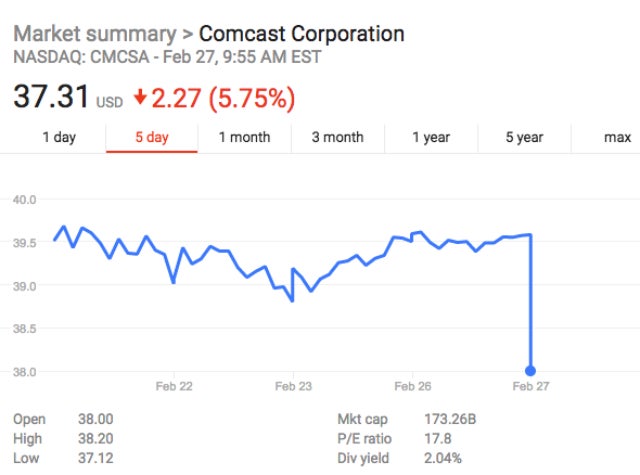 Previously, Fox was the frontrunner to buy Sky. Comcast’s sales pitch is a 16 percent premium above Fox’s bid.

Fox stock is also trading down this morning, as is Disney’s, which is in the process of acquiring the majority of 21st Century Fox assets. Those are down about 1.5 and 2.5 percent, respectively.

In other Tuesday TV merger and acquisition news, the U.S. Department of Justice has given Discovery Communications the OK to purchase Scripps Networks for almost $15 billion. That’s got Discovery stock trading up almost 4 percent today.