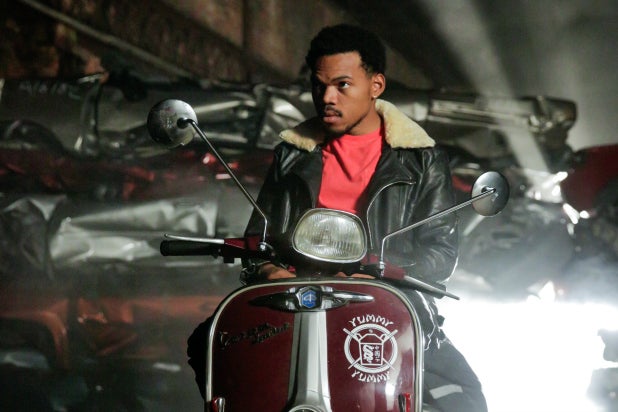 “Slice,” the feature film debut for Chance the Rapper and his childhood friend, writer-director Austin Vesely, had its premiere and sole theatrical screenings on Monday night, just before distributor A24 surprise-dropped it on iTunes, digital and on-demand like it’s a new Beyoncé album.

“It was a drunken scribble in a notebook that I turned into a script for a short film,” writer/director Vesely joked during a Q&A after its Chicago screening, which was simulcast to the screenings in 20 other cities.

That quip was appropriate for the very laissez-faire occasion, at least from the ground in Los Angeles, where the scene at the Regal Cinema L.A. Live in downtown was the opposite of a big premiere to-do. Almost no signage to even signify the movie was showing could be seen, and attendees weren’t even sure what they were in for.

“So what’s this movie supposed to be about,” one 20-something woman asked while making her way into the theater.

Well, the logline in the film’s trailer says it all: “It’s a story about a ghost, a werewolf and a pretty s–ty pizza place.

The horror-comedy, also starring Paul Scheer, who shot his scenes in one 15-hour day, Rae Gray (“Fear the Walking Dead”) and “Atlanta’s” Zazie Beetz (most recently seen in “Deadpool 2”), is a whodunit murder mystery in a world where humans, ghosts, ghouls, witches and werewolves live side-by-side.

The film follows the events in the spooky, corrupt small town of Kingfisher. The town has had a bit of a ghost problem since an asylum, where patients were tortured and experimented on, burned down and the victims were buried in a mass unmarked grave. It’s explained that the mayor designated a part of town — aptly named Ghost Town — for the ghosts to live so they’re not disrupting the human occupants. Not exactly a subtle political metaphor.

By the way, that unmarked grave turns out to actually be a gateway to hell and, oh, home to a pizza restaurant staffed by a rag tag group of employees. When restaurant’s deliverers start being killed, the town goes into a panic, blaming ghosts, a werewolf — he’ll tell you he’s not that kind of werewolf — and anyone else who fits the crime per local prejudices. In order to clear their names and uncover the truth, a group including a ghost, a werewolf and a journalist set out to solve the mysterious murders.

“When I write stuff it never ends up being something that fits a formula that you’re familiar with,” Vesely said. “But also it’s the politics.”

The cast in attendance for the Q&A talked about how the unique script attracted them to the project, which was shot on a shoestring budget (so much so, in fact, the ghosts are just actors with white face paint to make them look dead).

“I just thought the script was so fun and funky. I love things that just commit to what they are,” said Beetz, who started filming “Slice” before the season one premiere of “Atlanta.”

The film surely knows what it is. The stylized, often campy, noir throws twists, horror and mystery tropes, as well as plenty of off kilter jokes left and right. And the audience lapped it up. When jokes landed and the clever tone really seemed to work overtime to elevate the film, the audience would burst into laughter — particularly the boisterous guy who sat behind me and seemed to enjoy every nugget the film had to offer.

But you can see for yourself online right now — and for a taste, watch the trailer below.