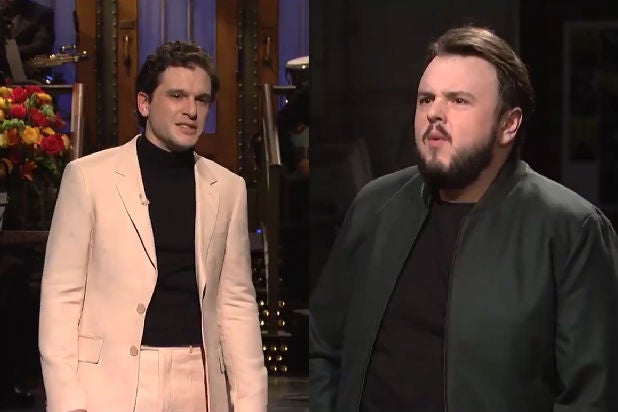 On the latest episode of “SNL,” host Kit Harington said he was glad that the final season of “Game of Thrones” means he can move on to other roles after 10 years playing Jon Snow. But that didn’t stop a bunch of people from interrupting his opening monologue to pester him for spoilers — including several of his co-stars.

Early on, Harington did the frequent “SNL” gag of taking questions from “audience” members, which backfired when the first person he spoke to got salty because Harington wouldn’t tell him who “wins ‘Game of Thrones.'” After having that person forcibly ejected from the room, Harington took another question from someone who turned out to be Emlia Clarke (AKA Daenerys Targaryen).

Harington was confused when Clarke asked if he could tell her how the show ends, since she plays the show’s other main character. “It’s been so damn long since the last season,” Clarke explained. “Plus a lot of my scenes are just talking to dragons,” which she said largely involved interacting with a tennis ball on the end of a stick.

Then she changed topics. “Do you remember in season 6 when we had sex?” she asked. “Yes,” Harington said. “Did you know they filmed that?”

(NOTE: Jon Snow and Daenerys actually had sex in season 7, not season 6. But we digress.)

After taking questions from some confused “Harry Potter” fans, Harington was next approached by John Bradley, who plays Samwell Tarley. “I’m just wondering, do you know what happens to Samwell?” he asked, explaining that “they only let me see two pages of the script. All my character says is ‘ahhhhh!”

“What’d it say before that?” Harington asked.

After taking a question from “SNL” cast member Pete Davidson, who was dressed as the Night King, Harington’s last questioner turned out to be his wife Rose Leslie, who also played Ygritte in seasons 2-4 of “Game of Thrones.”

Harington asked if she also wanted to know how the show ends. “I don’t care about that. I’m not a nerd,” Leslie said.

But it turns out she did have a pressing question for her husband. Now that “Game of Thrones is coming to an end, “What are we gonna do for money now?”

“You kept telling me ‘I’m king of the north, we can order Uber Eats whenever we want,” she continued. A flustered Harington quickly changed the subject by telling the audience to expect a great show.

Watch the bit below: