It’s not a good sign that while watching “Robin Hood,” the title song from Mel Brooks’ 1993 “Robin Hood: Men in Tights” was flitting through my head for much of the time.

The earlier movie’s rousing theme song, done as a production number, included the lyrics, “We’re men, we’re men in tights/ We rob from the rich and give to the poor, that’s right!/ We may look like sissies, but watch what you say or else we’ll put out your lights!/ We’re men, we’re men in tights.”
Oh, but that Russell Crowe, the dour Robin Hood of this new Ridley Scott-directed version, would break out into song and dance. It could only enliven, this ponderous, two-hour-and-20-minute "Gladiator in Tights" slog that’s an appetizer before a main course that never arrives.
Literally.

The movie’s biggest problem is that it is an origins tale, intent on giving us the back story on how Robbing Hood became Robin Hood.

Indeed, just the fact that this is an origins story remains its biggest problem – well, other than we once again get Ridley Scott casting Crowe as a weary warrior compelled to take up arms so that, geez, all men will be free.

Well, Robin Hood isn’t Superman or Spider-Man; we don’t need to know the origin of his allergy to Kryptonite or how a lab accident enabled him to shoot webs from his wrists.
Robin robs from the rich and gives to the poor. End of story. Isn’t that the story we actually want to see? 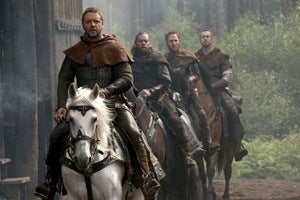 Instead, here Robin begins as a journeyman archer who is bone tired after spending a decade off on a Crusade with King Richard the Lionhearted. When Richard dies in battle in France, Robin deserts, eventually assuming the identity of a fallen English knight and heading back to Nottingham to return the dead man’s sword to his father. Once in Nottingham, he falls for Marion (Cate Blanchett), the knight’s widow.
That part is easy to follow and the scenes between Crowe and Blanchett are winning. More convoluted and way less intriguing is all the mumbo-jumbo about the French king plotting to conquer England and callous King John, Richard’s successor, plotting to rule England with an iron hand and an engorged purse (thanks to merciless taxing of his subjects).
All of which by the end — and only after numerous, action-heavy, sword-clanging battle scenes — results in Robin being denounced by King John and going into hiding in Nottingham’s forests.  At which point a title card appears, just before the final credits roll, reading, “The legend begins.”
Well, duh! 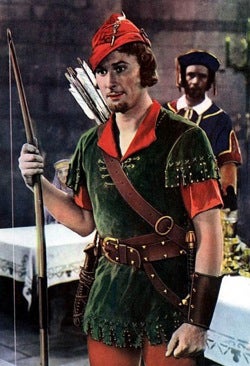 Hollywood has been aquiver over Robin Hood nearly since movies began, making dozens of different versions, not to mention several TV series. Douglas Fairbanks, the silver screen’s first great swashbuckler, let his bow do the talking in the 1922 silent, “Robin Hood.” Errol Flynn, Warner Bros.’ leading action hero during Hollywood’s Golden Age, athletically leapt about in Technicolor in 1938’s “The Adventures of Robin Hood” (pictured).
(Side note: When I was 8, I saw Flynn’s classic version during a revival showing at a special holiday matinee. My fellow pipsqueak filmgoers and I discovered that if you tossed your jacket aloft during the icky kissing scenes with Robin and Maid Marian, the coats interfered with the projected image and, albeit briefly, blocked the lip locks on screen.)
In more recent memory, Disney tried a cartoon version in ‘73, with a wily fox robbing the rich to give to the poor.
Even more memorably, in 1976 Sean Connery shone as a rueful, creaky, middle-aged Robin Hood in “Robin and Marian.” His Robin was only too aware that it’s far harder to be a man than a legend. (The film marked Audrey Hepburn’s welcome return — playing Marian — to movies after a nine-year break devoted to marriage and motherhood.)
In 1991, Kevin Costner, at the peak of his popularity thanks to “Dances With Wolves,” took on the title role in “Robin Hood: Prince of Thieves.” It made nearly $400 million worldwide, but Costner was such a smug and self-righteous jerk in his jerkin, one couldn’t help rooting for Alan Rickman’s snarling sheriff of Nottingham to catch him.
Which takes us up to the preternaturally debonair Cary Elwes (in his pre-“Saw” days) as the ultimate Brit twit in the aforementioned “Men in Tights.” In classic Brooks fashion, it gleefully mauled and satirized every previous film version.
It’s probably heresy to say this, but “Tights” just may be my all-time favorite Robin flick. At any rate, it certainly it won’t be displaced in my affections by this new Scott/Crowe version.
This “Robin Hood” is nothing but foreplay. The real action, it seems, won’t happen until the sequel gets made, if it ever does.
Based on this one, I won’t be holding my breath.