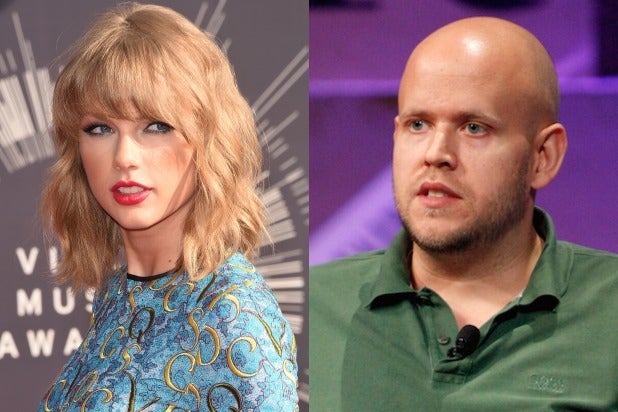 Taylor Swift is nowhere to be found on Spotify these days after pulling all of her music from the streaming music service. Spotify CEO Daniel Ek took to the company’s blog to warn the pop star that that move might hurt her in the end.

“You can’t look at Spotify in isolation — even though Taylor can pull her music off Spotify (where we license and pay for every song we’ve ever played), her songs are all over services and sites like YouTube and SoundCloud, where people can listen all they want for free,” Ek wrote. “To say nothing of the fans who will just turn back to pirate services like Grooveshark. And sure enough, if you looked at the top spot on The Pirate Bay last week, there was ‘1989.’”

This latest essay aimed at Swift is far less playful than the one Spotify posted earlier this month, in which the company used lyrics from her songs to try and convince her to keep her tracks available on the site. In his new blog post, Ek argues that his company is paying musicians like Swift the money they deserve for their songs. A lot of money.

“Spotify has paid more than $2 billion to labels, publishers and collecting societies for distribution to songwriters and recording artists,” Ek said. “$1 billion from the time we started Spotify in 2008 to last year and another $1 billion since then. And that’s $2 billion dollars’ worth of listening that would have happened with zero or little compensation to artists and songwriters through piracy or practically equivalent services if there was no Spotify — we’re working day and night to recover money for artists and the music business that piracy was stealing away.”

Ek also dispelled several misconceptions about Spotify’s business model and its overall mission for the future.

“We’re getting fans to pay for music again,” he said. “We’re connecting artists to fans they would never have otherwise found, and we’re paying them for every single listen. We’re not just streaming, we’re mainstreaming now, and that’s good for music makers and music lovers around the world.”

According to Ek, the payout for an artist like Swift would, “exceed $6 million a year.”

Swift and her record label Big Machine probably aren’t second-guessing their decision to drop Spotify though. The 24-year-old’s album “1989” sold more than 1.2 million copies in its first week.

“That’s awesome,” Ek wrote about Swift’s album sales. “We hope she sells a lot more because she’s an exceptional artist producing great music. In the old days, multiple artists sold multiple millions every year. That just doesn’t happen any more; people’s listening habits have changed — and they’re not going to change back.”