Stephen Curry is the latest modern-day sports superstar to have a series on his personal life by “Tom vs. Time” director Gotham Chopra.

The three-time NBA champion is the subject of the latest Facebook Watch series, “Stephen vs. the Game,” which chronicles the Golden State Warriors star’s journey throughout the 2018-19 NBA season. It is set to premiere later this spring.

“This past year has been an incredible chapter in my life — from the birth of my first son to winning a third championship — and we’ve been capturing it all,” Curry said in a statement on Monday. “This series is deeply personal, providing an in-depth look into the pivotal moments from the last year and exploring everything that is important to me.

“It’s been a fun project to work on with my Unanimous team and Facebook. I have incredible fans, and I’m excited to share my life with them in a way I never really have before,” he added.

“Stephen vs. the Game” is executive produced by Unanimous Media and Religion of Sports, and directed by Chopra. Following “Tom vs. Time,” which featured Tom Brady’s life showcased in the same manner, the series marks the second installment in the Facebook Watch VS series, which aims to explore the personal motivations that drive some of the world’s most accomplished athletes.

Here’s the official description of the sports documentary series:

“Stephen vs The Game” delivers an unprecedented look into the life of Curry, a transcendent athlete who, through unprecedented three-point shooting and unbridled joy for the sport, is reinventing the way basketball is played. The series will explore what drives him on and off the court, including his family, faith, personal passions, and legendary work ethic — all of which have helped him become one of the most revered athletes in the world. The doc will also include never-before-seen childhood footage of Curry and behind-the-scenes footage from his 2018 NBA championship run. 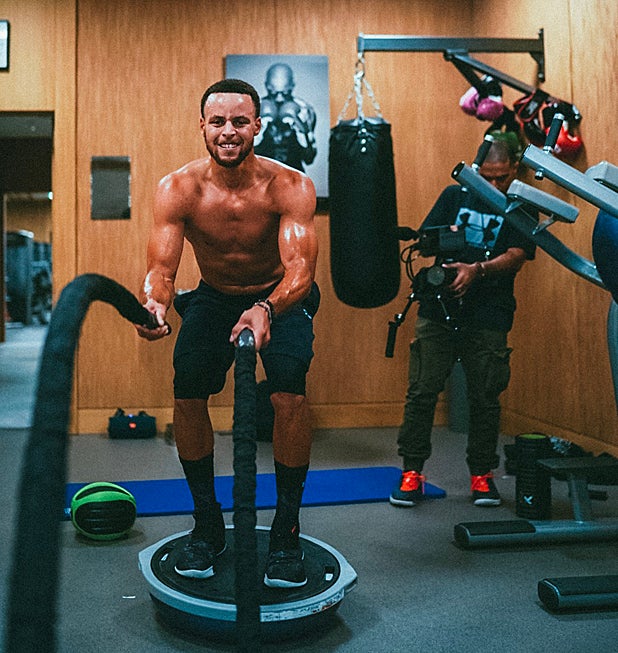 “Stephen has an amazing story that should really resonate with the Facebook community, which makes him the perfect next subject for our VS series,” Chopra said.

“A lot of people have heard about his faith, but I don’t think they know the half of it. Being able to ride shotgun with Stephen across this historic season and get a glimpse into the three foundational elements of his life — faith, family, and hoops — has been an amazing ride and something I think millions around the world will be fascinated by.”

Despite being sidelined for 11 straight games earlier in the season with a groin injury, Curry is heading into his sixth NBA All-Star game in Charlotte, North Carolina, this Sunday.

The ”Black Panther“ star was a hit at the GQ party, as sports and Hollywood collide before LeBron and Steph take to the court