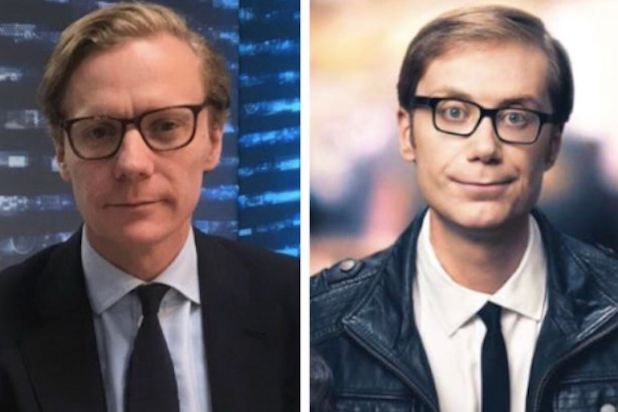 If so, Stephen Merchant was born to play CEO Alexander Nix, who is potentially his long-lost twin. The British comedian — best known for starring in U.K. version of  “The Office” and partnering with Ricky Gervais on several projects — tweeted a side-by-side picture comparison on Tuesday afternoon, pointing out the uncanny resemblance.

Also Read: How a Russian-American Researcher Got Private Data of 50 Million Facebook Users

Lot of people saying I should play Alexander Nix, CEO of shady Cambridge Analytica. Don’t see it myself. pic.twitter.com/lN7hYGjoci

If you haven’t been following along, Nix was suspended earlier on Tuesday, after he was recorded bragging about using bribes and sex workers to entrap politicians on behalf of his clients. Nix said he could usually “send some girls” to the candidates house to get what the firm wanted.

Cambridge Analytica has also been in the news for its role in Facebook’s massive data leak. The firm paid a University of Cambridge professor for info on 50 million unwitting Facebook users, violating the social media company’s terms of service in the process. Cambridge Analytica used the personality profiles to target voters during the 2014 U.S. midterm elections, and eventually worked with the Trump administration during the president’s successful 2016 bid for the White House.