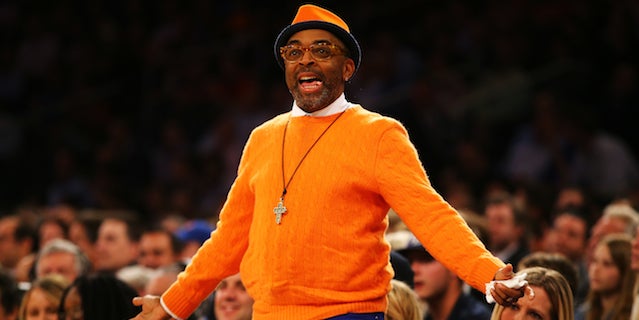 The "Old Boy" director, who is trying to raise $1.25 million on Kickstarter for his newest joint, told NextMovie that Soderbergh was one of three backers who have pledged $10,000 to the project, which has racked up just under $105,000 total. The generous donation earns Soderbergh the top prize: A dinner and basketball date with Lee.

"I'm taking him to dinner and we're going to the game together," Lee said.

Lee, an avid New York Knicks fan, calls the incentive the "playa-playas" award, because recipients will have to honor to sit in his wife Tonya's seat "front row in the best house at the world's most famous arena — Madison Square Garden."

Soderbergh has, apparently, not yet requested which NBA opponent he'd like to see the Knicks take on.

"I don't even know if he likes sports, so I'm gonna pick the game for him," Lee added. "But I'm giving a huge shout-out to my man Steven Soderbergh for the support and I'm really humbled with Steven coming on board and doing that. Thank you, Steven."

The movie Lee hopes to make with the money fans are willing to provide does not have a title yet, but the director described it on his Kickstarter page as being a "funny, sexy, and bloody" tale about "human beings who are addicted to blood."