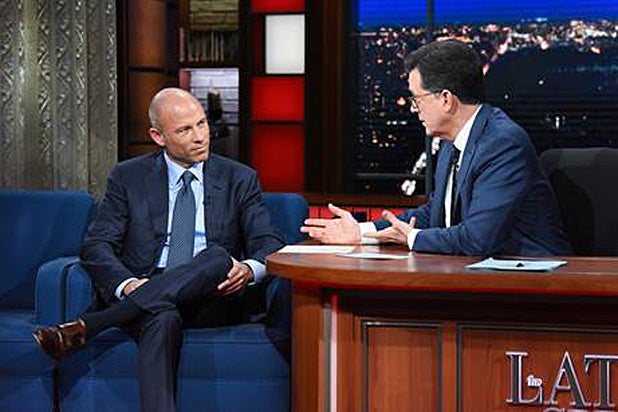 Avenatti brought what he said was a receipt for a $130,000 wire payment made by attorney Michael Cohen.

.@MichaelAvenatti has brought receipts! This is the image of the incoming wire payment from Michael Cohen to Stormy Daniels. #LSSC pic.twitter.com/JpAuLp59rr

“This is a copy of the incoming wire receipt from Ms. Daniels’ prior counsel showing the origin of the $130,000,” he told Colbert.

He said the payment came from the San Francisco branch of a company Cohen created, meaning that if California Attorney General Xavier Becerra were to bring charges against Cohen, Trump would not be able to pardon him.

“That could take away his get-out-of-jail-free card right there,” Colbert said.

Also Read: Stormy Daniels Lawyer Asks to Go on 'Hannity': 'We Are Both Street Fighters'

Daniels, whose real name is Stephanie Clifford, is suing Trump to vacate the nondisclosure agreement she signed in 2016 for $130,000 paid by Cohen. She is also suing Trump for defamation after he called some of her statements “fraud” on Twitter. A California judge set a July hearing date for the first lawsuit.

When Colbert asked why he didn’t believe that Cohen simply cut the $130,000 check for Trump, Avenatti replied: “It’s absurd to suggest that an attorney would advance $130,000 for somebody from a personal home equity loan, never tell him about it — not just anyone, but a billionaire running for president — never seek reimbursement, never tell him about it. It’s just absurd, it’s ridiculous, nobody believes that.”

“What if they’re a terrible attorney?” Colbert responded. “What if he’s just really bad it his job?”

Avenatti also told Colbert that he has been approached by other women — who he can’t name presently — who say “they have NDAs with the president or intermediaries.”

Colbert held up his fingers and asked Avenatti to respond as to how many women could potentially approach him. It turns out that the late-night host doesn’t have enough fingers to count them all.

“How long is this show? I forget,” Avenatti joked.

.@StephenAtHome is curious to know from @MichaelAvenatti how many other NDA’s President Trump might have out there. #LSSC pic.twitter.com/BxEtu1FgaQ