Traditional TV is slowly headed the way of the dinosaur and Betamax, with more Americans subscribing to a streaming service than paying for satellite TV or cable for the first time ever, according to a new survey from Deloitte.

The numbers are close —  69 percent of respondents are paying for at least one streaming service, compared to 65 percent paying for cable or satellite — but traditional TV is trending in the wrong direction, with the 13th annual Digital Media Trends Survey showing 27 percent of respondents have dropped their pay TV packages in the last year. That stat has been reflected in the struggles of the usual TV juggernauts, with DirecTV reporting it lost 400,000 subscribers during the fourth quarter of 2018 alone.

Netflix, on the other hand, has continued to flourish, with the world’s dominant streaming service adding nearly 30 million customers last year. It now has about 60 million subscribers just in the U.S.

One reason viewers are continuing to drop cable and satellite: they hate advertisements. 75 percent of Deloitte’s respondents said there are too many ads when they watch traditional TV.

Still, the report shows streaming versus traditional TV isn’t necessarily an “either/or proposition,” at least right now for many viewers, with 43 percent of respondents paying for at least one streaming service and one pay-TV package. 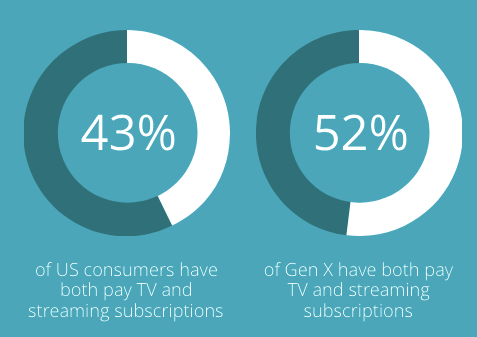 Binge watching, which Deloitte defines as watching four hours or more of content in a single sitting, continues to play a major role in streaming’s rise, with 37 percent of millennials saying they binge at least once per week. Another 40 percent of U.S. millennials said they stream at least one movie per day.

Perhaps ironically, one red flag for streaming, according to the report, could be an increasingly crowded market. The more streaming services there are — and with more on the way from Apple and WarnerMedia — the more frustrating it will get for viewers to follow and pay for.

“With more than 300 over the top video options in the U.S., coupled with multiple subscriptions and payments to track and justify, consumers may be entering a time of ‘subscription fatigue,'” said Kevin Westcott, vice chairman and U.S. Telecom and Media and Entertainment leader at Deloitte.