A consortium of television networks has responded to an open letter from showrunners demanding specific plans to protect workers on TV productions in regions where abortion is no longer legal.

In their own open letter sent to the group of showrunners on Wednesday night, the studios expressed general and somewhat vague support for the right to an abortion and the safety of employees. However, the group – which includes AMC Networks, Amazon Studios, Apple TV+, NBCUniversal, Netflix, Paramount, The Walt Disney Company and Warner Bros. Discovery – did not respond specifically to any of those demands.

“We share your concerns around the health, safety and well-being of our dedicated employees and the people who support our productions. We believe they should have access to safe and effective health care, and their privacy should be protected,” the Studios’ letter said.

Also Read:
Facebook Defends Turning Over Messages and User Data in Nebraska Abortion Case, Says ‘Much of the Reporting’ Is ‘Plain Wrong’

The letter discussed how each studio’s individual plans provided “comprehensive health care coverage” and noted, without any specific details, that various entities in the entertainment industry are making changes to deal with the challenges posed by the patchwork of anti-abortion laws in America.

“We want to assure you that we are individually focused on supporting the health, safety, well-being and privacy of our respective employees and those who support our productions as we continue to monitor this evolving situation,” the letter continued.

The initial letter, sent July 28 by a group of over 400 showrunners and TV creators, demanded among other things that studios:

– Published policies and procedures to provide an abortion travel subsidy for employees of your productions including specific information on how the employee’s medical privacy will be safeguarded
– Protocols outlining the scope of medical care for employees of your productions, including ectopic pregnancies and other pregnancy complications that require medical treatment via abortion while working for [Studio]
– Policy regarding criminal and civil legal protection, including indemnification and defense against liability, for any member of a production who facilitates [Studio]’s protocols or provides [Studio]’s policy information and guidelines to an employee seeking an abortion
– Pledge to discontinue all political donations to anti-abortion candidates and political action committees immediately 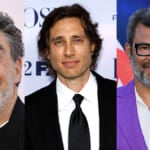 A group of 600 male showrunners soon signed a solidarity letter supporting the effort.

The original letter also demanded a response by no later than 10 business days – a deadline that would have expired at midnight, Aug. 10. While the studios did meet that deadline, they notably elided any addressing of those concerns, most notably the demand to stop contributing to anti-abortion politicians.

Read the full letter sent by the studios below:

Thank you for your letter of July 28, 2022. We share your concerns around the health, safety and well-being of our dedicated employees and the people who support our productions. We believe they should have access to safe and effective health care, and their privacy should be protected.

Each of our individually designed corporate health plans provides comprehensive health care coverage for our respective employees. We have been independently updating our respective employees – who live and work throughout the country – as plans and policies change and expand to provide reproductive care and other support now needed in states that have restricted or outlawed abortion access.

Most workers on scripted film and TV productions are covered by industry health plans that are jointly administered by union and management trustees under the collective bargaining framework. In partnership with various industry health plan staff and the union trustees on those plans, our management trustees worked swiftly to review existing health benefits, and several of these industry health plans have already adopted amendments providing for reimbursement for travel expenses associated with securing abortion services for participants and their dependents who reside or work in states where such services cannot be lawfully obtained. We understand the other industry health plans will be considering similar changes this month. The participants in the various industry plans have been receiving communications directly from the plans about these amendments.

We are pleased that our industry partners have quickly addressed this important issue and are committed to continuing to evaluate ways that we can best provide for our employees and workers who support our productions.

We want to assure you that we are individually focused on supporting the health, safety, well-being and privacy of our respective employees and those who support our productions as we continue to monitor this evolving situation. We look forward to working with you to continue to make great content for our audiences around the world.

As of this writing, the showrunners behind the initial letter have not responded.