Redbox will cost the Southern California region almost $1.5 billion in lost economic output and more than 9,000 jobs by disrupting the home entertainment industry’s business model, according to a new study by the Los Angeles County Economic Development Corp. 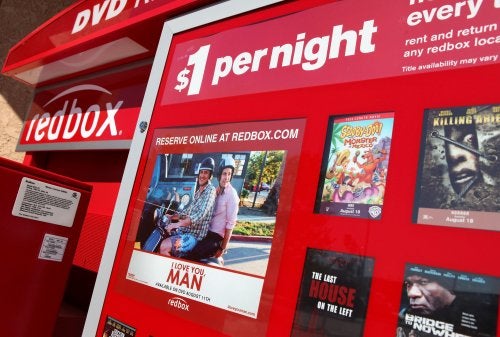 ndeed, the home video industry as a whole is being challenged by international piracy, slowing consumer demand for DVDs and dispersement of consumer usage across emerging media platforms.
However, the county report singles out the dollar-a-rental kiosk chain, claiming that its low-margin transactions are having a huge trickle-down effect on the local region.
“The economics of the motion picture industry are based on exclusive release windows, which allow price differentiation," Gregory Freeman, vice president of consulting and economic policy for the LAEDC, said in a statement. "Redbox, or any other distributor that weakens the release-window model, could reduce overall industry revenues. Lower revenues will likely lead to lower production activity, hurting the Southern California economy.”
Redbox spokesman Christopher Goodrich told TheWrap the study is based on "a number of different assumptions, and what we feel is a lot of problematic data."
Goodrich outlined several ways Redbox believes it is actually supporting the industry — including a third-party study that showed the company pays about half of its revenues back to studios for usage rights and other expenses.
"Redbox is an engine for industry growth, increasing consumer interest in film and providing new revenue streams to studios," Goodrich said, citing data that shows Redbox customers also buy DVDs, and that its kiosks have brought people who weren’t previously renting any DVDs back into the entertainment business revenue stream.
The LAEDC doesn’t put all of the mayhem on the head of Redbox — just most of it.
"On top of the losses caused by Redbox $1 DVD rentals, the home video industry as a whole is undergoing transformational change," the report says. "The current recession has adversely affected consumer purchases of discretionary items, technology is enabling digital delivery of content and households are opting for other forms of entertainment."
Freeman told TheWrap the current problem is that Redbox is offering low-cost, new-release rentals at its kiosks the same day they hit store shelves, which is cannibalizing traditional revenue streams for studios.
"We acknowledge there are a lot of moving parts, and we’re just isolating out one,” Freeman said. “We want to see, if you change the release window on low-cost rentals or sales at lower prices, what’s the impact on the industry.
"The study is not just about Redbox," he added. "It’s just a way to frame the larger shift in physical delivery in the industry.”
Freeman said with Redbox undercutting the prices at traditional rental chains like Blockbuster, the question for the movie industry becomes “whether the extra purchase or rental of lower-priced goods is sufficient to overcome fewer transactions at a higher price point.”
It’s an issue the major studios have honed in on, targetting the kiosk company as a threat to their profit margins.
In addition to the rental sector, studios have blamed Redbox, too, for damaging the higher-margin DVD sales business, with more consumers choosing to rent discs rather than pay a premium to own them.
Earlier this year, Universal, 20th Century Fox and Warner Bros. refused to sell DVDs to Redbox until 28 days after they hit stores. Redbox responded by suing the three studios, claiming copyright misuse and violation of antitrust laws.
The three cases are still winding their way through the legal system, but if Redbox cannot access new releases, it might end up in a similarly dire situation to the Los Angeles film business.
According to the study, that’s a bleak place to be. As a consequence of the dramatically altered rental market, 9,280 jobs will be shed, with more than half of the losses occurring in the information sector. In addition to motion picture and sound recording industries, this sector includes publishing industries, radio and television broadcasting, telecommunications industries and Internet service providers.
Other industries impacted include retail trade, accommodation and food services, healthcare and social assistance, professional, scientific and technical services, and manufacturing.
The loss of production also will result in a reduction of up to $35.4 million in contributions to health and welfare funds for entertainment guild and union members, the report said..
Despite an overall increase in transactions this year, top home entertainment executives predict the industry will once again be down year-to-year, probably on a single-digit-percentage basis.
x
Looks like you're enjoying reading