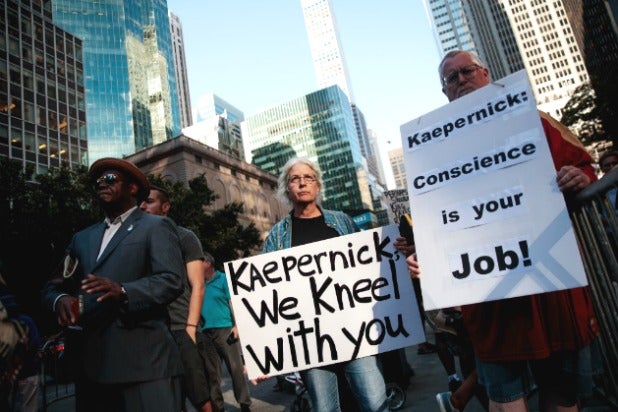 President Donald Trump’s “get that son of a b–h off the field” comment Friday night about NFL players who take a knee during the national anthem started a fiery debate on social media with some calling for the protection of free speech and others calling for an NFL boycott.

During a speech at a rally for Alabama Senate candidate Luther Strange, the president suggested the NFL fire players who protest police brutality by refusing to stand during the national anthem. “Wouldn’t you love to see one of these NFL owners, when somebody disrespects our flag,” Trump said, “to say ‘get that son of a b–h off the field’ right now, out! He’s fired?'”

Over the course of the 12 hours that followed, Twitter was hit with comments from both sides of the argument that resulted in #TakeAKnee trending. Many continue to call the protest disrespect for the flag and the country it represents.

“Don’t take American money, then disrespect the people paying you outrageous salaries, to play a game. Go ahead and kneel. We won’t be watching! #BoycottNFL,” one tweet reads. Here are a handful of the others who’ve had their fill of those who kneel:

#TakeAKnee
You may kneel down in protest against your country, & against those who keep us safe but don't count on me standing among u ever

#TakeAKnee Thank god those heroes in WW1 & WW2 etc. didn't take a knee otherwise we would all be talking German or worst yet not at all.

#TakeAKnee
Pretty certain that @Kaepernick7 will wind up broke and in prison. He could make $20M next year by following rules.

Don't watch @NFL tomorrow.
Don't give them a platform while they disrespect our flag.#BoycottNFL #TakeAKnee

#TakeAKnee 63 Million people voted for Trump. The question is; Do you need our business or not? @NFL don't play games!

Instead of #TakeAKnee, hit the @NFL and their anti-American bigots/players where it hurts – in the wallet! #BoycottNFL pic.twitter.com/kMgIib6OGx

On the flip side, there are others who spoke up in opposition to the POTUS’ statement.

“Donald Trump’s remark are a powerful example of why we have the First Amendment. We kneel with Colin Kaepernick,” wrote Zac Huerta in reference to the former San Francisco 49er quarterback. Here are a few of the others:

Donald Trump’s remarks are a powerful example of why we have the First Amendment. We kneel with Colin Kaepernick. #TakeAKnee

Im a libertarian, I believe in freedom and protection of rights. Even in disagreement. So if you want to kneel, go for it. #TakeAKnee

The entire #NFL should #TakeAKnee tomorrow and issue a statement that it isn't about soldiers or culture, but in a stand against a tyrant.

#TakeAKnee even if they bench you. Even if they jeer and hiss and throw things and drag your name through the mud. Stand up by kneeling down

I will make an effort to watch pro football for the first time in my 39 years of life if they #TakeAKnee for Kaepernick. #iamasonofabitch