Taylor Swift brought her Tampa, Florida, concert to a “Frozen” finale on Saturday night by performing “Let It Go” in costume.

In true Halloween spirit, Swift dressed as snowman Olaf, and brought out special guest Idina Menzel, who dressed as her character Elsa from the 2013 Disney film.

Menzel performed her award-winning single for the crowd at Raymond James Stadium and Swift joined her on the second verse. 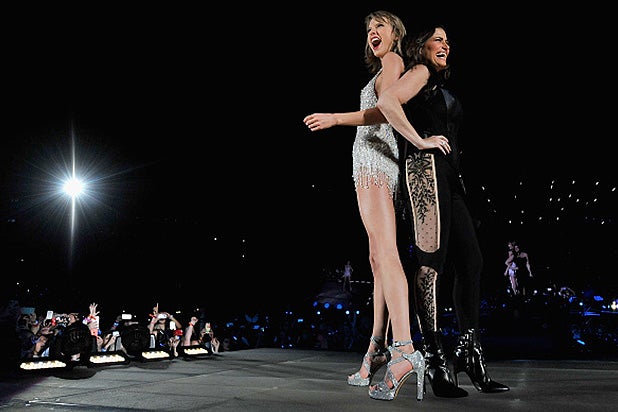 But the two didn’t stay in costume long.

They ripped off the Disney outfits, with Swift revealing a sparkling silver mini-dress and Menzel switched to a form-fitting black bodysuit.

Swift posted video of the performance on Twitter and her Instagram page along with the caption: “Frozen totally happened tonight. And 55,000 people sang ‘Let it Go’ so loudly, it nearly took my breath away. Good times, @idinamenzel.”

Also Read: 'Frozen 2' Is 'in the Works,' According to Star Idina Menzel

An excited Menzel returned the favor by writing on Instagram: “Thank you @taylorswift! That was definitely an out of body experience. Or out of Elsa’s body experience! #1989tourtampa.”

“Frozen,” which starred Menzel, Kristen Bell, and Josh Gad is the highest grossing animated movie of all time.

The animated adventure also picked up two Oscars including Best Animated Feature and Best Original Song for “Let It Go.”