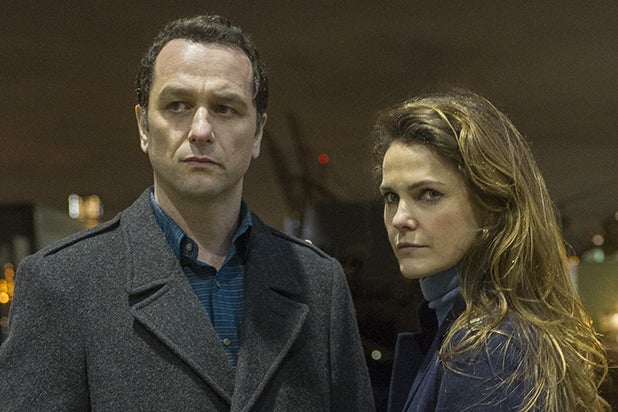 This story about “The Americans” first appeared in the Down to the Wire issue of TheWrap’s Emmy magazine.

“The Americans” never intended to be so relevant to the current political climate. Somehow, though, real news intruded on the show about Russian spies in the U.S., with its sixth and final season playing out against daily news about jailed spy Maria Butina and Russian election interference.

It made a show set in the 1980s seem unnervingly timely, even though the period setting meant that the actors didn’t have to worry about adjusting to the nightly news.

“If it was a current show I think it would be more of a quandary for us,” said Keri Russell, who played one half of a husband-and-wife spy team with her real-life husband, Matthew Rhys. “Maybe we were lucky that it ended when it did, before people got too weary of hearing about it.”

During the show’s six seasons, which wrapped with a gut-punching series finale in May, the couple on screen had some awfully nasty fights that could make things uncomfortable for the couple playing the roles.

“In some ways that can aid a scene, but it can also hinder it at well,” Russell said. “You bring all of your baggage to it.”

Even as real life made it more immediate, “The Americans” remained the polar opposite of most spy dramas. The show focused on emotional turmoil; rather than build up a high body count, it dealt Philip and Elizabeth Jennings emotional body blows. And where other spy dramas would’ve ended with one (or both) of its stars in body bags, “The Americans” featured a more poetic coda.

Also Read: 'The Americans' Finale: That Ending Was 4 Years in the Making

“As much as there was kind of a trashy, commercial part of me that wanted a shootout or dying, it was perfectly executed,” Rhys said.

Added Russell, “The destruction was of the family. And it was just as devastating, if not more.”

“The Americans” scored only its second nomination for Outstanding Drama Series this year, while Rhys and Russell were again nominated in their respective acting categories. But outside of Margo Martindale’s two guest-actor wins, the show hasn’t gotten the same recognition as other “prestige” dramas, despite appearing on TV critics yearly “best of” lists.

“We weren’t the hot show out of the gate,” said Rhys, who found a silver lining in the fact that they didn’t have to worry about any outside influence that would change the show’s direction. It wasn’t until the fourth season that it started to gain steam among Emmy voters. “I think it’s been the perfect trajectory.”

As showrunners Joel Fields and Joe Weisberg previously told TheWrap, the show’s ending was mapped out as far back as the beginning of the second season. “They were never going to be swayed,” continued Rhys. “They knew the story they were going to do from the very beginning.”