The Conners are going live. The upcoming Season 4 premiere of the ABC comedy will be another live episode, the network announced Thursday.

The cast will perform versions of the episode for both the east and west coast broadcasts when the show returns on Wednesday, Sept. 22. ABC will also launch a “You Can Be a Conner” sweepstakes allowing fans to enter to be part of the episode via a live conversation about “how they deal with some of the same life issues that the Conners navigate on a daily basis.”

The winners will be called on-air by a member of the Conner family as part of the episode’s storyline. 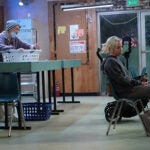 “The Conners” last went live in 2020 with an episode tied to the New Hampshire primary. The episode featured live news coverage of the race with added commentary from the show’s characters. “Live From Lanford” was a success for the show, earning season-high viewership last February.