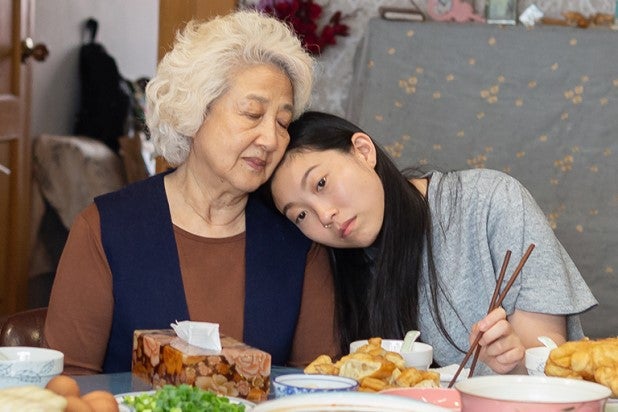 Lulu Wang’s “The Farewell” is a movie about family, with the core relationship being the one between New Yorker Billi (Awkwafina) and her beloved Chinese grandmother or Nai Nai (Zhao Shuzhen).

The process of casting the two main roles was as different as the actors themselves: Awkwafina, a breakout movie star from the States, and Zhao, a veteran TV actress from China.

In a recent director’s Q&A, Wang revealed she was reluctant when she was first pitched Awkwafina for the role of Billi — who is based on Wang herself.

“When her name was brought up it was before ‘Crazy Rich Asians’ and ‘Ocean’s Eight,’ so I only knew of her from her rap videos,” Wang recalled. “I had been auditioning different actors and my producer said, ‘Have you considered Awkwafina because she’s read the script?'”

“And I was like, ‘The rapper from Queens? To play me? In a dramatic film? Are we making the same movie?” Wang said, half-jokingly. “I thought my producer was pushing her because she was an influencer and had a lot of followers.”

“I was very resistant at first but then we had coffee and she told me she was raised by her Chinese grandmother,” Wang said of their face-to-face meeting. “She’s half Korean but her Korean mother passed away when she was four so she really doesn’t connect at all with that side of her heritage and connects more with her Chinese side because of her grandmother.”

After watching Awkwafina’s audition tape, Wang admits she was “blown away.” “I had no idea she could do that,” she said. “Very expressive in silence, not saying a word you could see all the conflict in her eyes, and I knew that’s what I needed — somebody who could do that with their face for 90 minutes.”

“I definitely doubted myself at first. I didn’t know if I would be able to do it justice,” Awkwafina said at TheWrap’s studio during January’s Sundance Film Festival. “I did become emotionally invested in the character and in the story. It’s so beautiful and moving, I never thought that I would see a script like this in my career.”

Casting Billi’s Nai Nai was a different challenge, given the relative unfamiliarity of China-based talent.

“She does a lot of soap operas,” Wang said of Zhao, who makes her American film debut in “The Farewell.”

“One of the things we underestimated was just how expensive Chinese actors are,” Wang admitted. “We don’t know who they are! So you get there and they’re like the grandmother in everything.”

“Everyone was like, ‘She plays grandmas in a bunch of shows and everyone loves her.’ I had to call her up and practically cry on the phone and beg her to do it.”

While filming, Wang and the crew referred to the veteran actor as Teacher Zhao out of deference.

“In China, you meet someone who is your grandmother’s age, you would just call them ‘grandma’ even if they’re not your grandma,” Wang explained. “When you’re working with somebody and they’re older, you refer to them as ‘teacher’ as a sign of respect. So instead of ‘Ms.’ it’s like saying ‘Master’ or ‘Teacher.'”

You can see Awkwafina and Teacher Zhao in “The Farewell,” which opens wide this weekend.