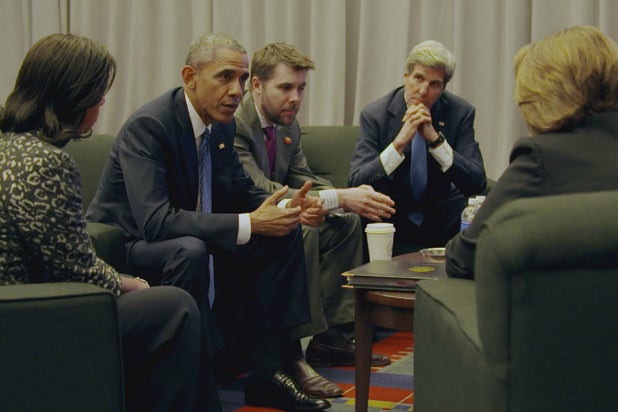 “The Final Year” ought to begin with a giant, unmistakable warning for the likely majority of its audience. Since it doesn’t, here’s ours:

This is a movie about the last year in President Obama’s tenure. It features empathetic, experienced adults trying their absolute hardest to make the world a better place. And their earnest passion could break your heart.

Watching Obama and his staff commit themselves so thoughtfully to their work feels a little like sitting alone on your couch, with your cats, scrutinizing your ex’s wedding video. So if you’re not entirely into your current relationship (which in this case would be with the sitting POTUS), despair may ensue.

Director Greg Barker (“Manhunt: The Inside Story of the Hunt for Bin Laden”) spent much of 2016 following several key players in the Obama administration. Had the year ended differently, his wonkish approach probably would have appealed to a minority of politically-obsessed liberals or film buffs who still stream the 1993 Bill Clinton doc “The War Room.”

Under the current circumstances, though, Barker has given us a film with much broader appeal, one that’s not only absorbing but also essential in its depiction of humane, responsible leadership.

Obviously, the response to any political film will depend in part on personal politics, but compassion happens to be a universal emotion, not a partisan one. And Barker’s fly-on-the-wall approach eschews showy grandstanding and divisive biases. So there’s a better-than-usual chance that viewers on both sides of the aisle will find themselves moved.

Barker narrows his focus, for the most part, to the former president’s foreign policy team. Rather than inserting himself into the action (we’ll overlook the intermittently jarring hand-held camera), he wisely sits back and allows his well-chosen subjects to speak for themselves. And it is indeed compelling to watch Secretary of State John Kerry, UN Ambassador Samantha Power, and speechwriter Ben Rhodes grapple with their mission to honor — as Rhodes puts it — “an inclusive global view rooted in common humanity and international order.”

It is, of course, impossible to hear a quote like that — or to watch a documentary like this — in a vacuum. While less adept directors might have used a heavier hand to create a sense of contrast, Baker keeps specific references to other politicians to a minimum. And yet, the entire documentary is composed of moments that will evoke immediate nostalgia, for a time that only feels long ago.

As the film progresses towards November 2016, the weight of the imminent election does begin to deepen. It’s as if we’re watching a horror movie in which we, but not the characters, already know the twist ending.

This is the point where you may find yourself taking note of how diverse Obama’s staff is. How determined they are to help the disenfranchised, to combat global warming, to reach, as Obama himself says, “for the world that ought to be.”

Power’s respectful kindness as she meets with the Nigerian mothers of girls kidnapped by Boko Haram; Kerry’s righteous outrage at Russian duplicity in Syria; Rhodes’ resolute search for the proper sentiment when Obama visits Hiroshima: all of these scenes, and many others, come across as both immense and intimate, a reminder of the crucial connections between the earth’s citizens.

By the time we get to election night, in which Power joins Gloria Steinem, Madeleine Albright, and several other female diplomats for what they assume will be a thrilling celebration, we’re practically watching through our fingers. A few minutes later, Baker cuts to the shell-shocked Rhodes, a speechwriter who finds himself literally speechless.

A true leader, though, is never at a loss for words, always has a plan, and instinctually knows how to move forward. “I have to remind my staff that history really doesn’t follow a straight line,” Obama concludes, the very image of calm equilibrium in the face of an unexpected, potentially devastating storm. “The trendlines ultimately will be in the direction of a less violent, more empathetic, more generous world.” But the path there, he adds, “requires more individuals fighting for that future.” This movie can only inspire them.