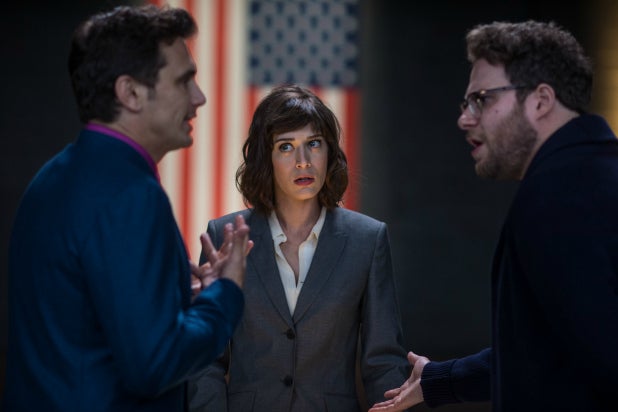 Even bomb-throwing anarchists have to mind their aim if they want to accomplish their goals. As comedians and satirists, the makers of “The Interview” are entitled to go to dark, outrageous, even controversial places — even if it means potentially opening their distributor up to a hack attack — but they’re also expected to keep a tight rein on their provocative material for maximum comic efficiency.

Alas, while “The Interview” never slacks in its mission to tell jokes, it’s such a messy and meandering movie that it never quite lands as a satire of politics or the media or anything else. There’s a tight and ruthlessly pungent comedy to be mined from this material, but this is an “Interview” that lasts too long and veers off in too many directions.

Screenwriter Dan Sterling, who collaborated on the story with directors Evan Goldberg and Seth Rogen, starts off with a shocking premise involving the assassination of North Korean leader Kim Jong-Un; even Hitler didn’t become a target for Hollywood until after the U.S. had signed on to World War II, although pulp magazines and comic-book superheroes (most notably Superman) took a poke at the Fuhrer even before Pearl Harbor.

In “The Interview,” TV host Dave Skylark (James Franco) learns that Kim (Randall Park, “Veep”) is a fan of “Skylark Tonight,” known for its softball celebrity interviews. Worrying about losing his longtime producer Aaron (Rogen) to a hard-news show, Skylark approaches the dictator about an exclusive sit-down on live TV.

Once Kim and Skylark agree on terms — the supreme leader will write his own questions, for one — CIA agent Lacey (Lizzy Kaplan) approaches Aaron and his boss about assassinating Kim once they’re in close quarters. (In this movie’s universe, North Korea has nukes that can reach the West Coast of the United States, and Kim has been threatening to use them.)

Also read: James Franco and Seth Rogen's 'The Interview' Will Not Be Shown in Asia

As a comedy team, Franco and Rogen are a naughty delight, with Skylark’s wide-eyed stupidity and incompetence playing off of Aaron’s nervous tension and clumsiness. When their seemingly airtight assassination plan hits bumps, it does so in ways that perfectly fit the characters, whether it’s Skylark’s insistence on using a more trendy carry-on bag to hide the CIA-supplied ricin strip or Aaron finding himself face to face with an apex predator in the middle of the North Korean jungle.

What weighs down “The Interview” is the bane of so many modern American comedies: you’ve got smart, funny people who seem to think that whatever they make up on the set will be funnier than a skillfully-crafted screenplay, and the result is a film whose attention deficit disorder prevents any kind of comic momentum or sharp satirical observations. The actors play off each other well, yes — Park’s Kim wins over Skylark with cocktails, karaoke, and shared confidences about disapproving dads, while Aaron falls for Kim advisor Sook (Diana Bang, “Bates Motel”) — but it’s the difference between a well-oiled machine and a box of shiny ball bearings.

Franco and Rogen’s previous on-screen pairings in “This Is the End” (Rogen and Goldberg’s directorial debut) and “Pineapple Express” (with the exceedingly capable David Gordon Green in the director’s chair) skillfully mixed absurd comedy with violent and grotesque situations. Things get bloody in “The Interview” as well, but the shift into carnage doesn’t feel as organic or as earned as in those earlier movies.

There’s a lot to like here, whether it’s a cameo by Eminem (as himself) making unexpected revelations on Skylark’s show or the Franco and Rogen team’s awkward encounters with no-nonsense establishment types from Langley to Pyongyang.

Ultimately, however, “The Interview” could have benefited from a little more rigor in the editing room and a little less decadence in its running time. A little creative totalitarianism every now and then can work wonders.