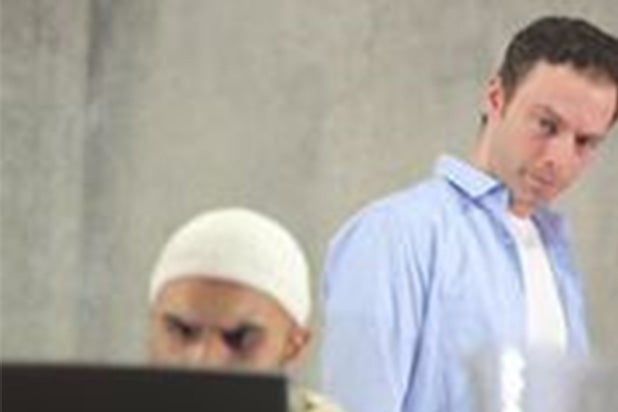 The Pulitzer Prize-winning “Disgraced” was but a warm-up for Ayad Akhtar’s newest play, “The Invisible Hand,” which opened Monday at the New York Theatre Workshop.

Akhtar has written a financial thriller that is every bit as arresting and nail-bite inducing as J.C. Chandor’s “Margin Call.” The remarkable thing about Akhtar’s play is that it’s not set in some gleaming glass tower on Wall Street but in a dank bunker somewhere in Pakistan in the near future.

An American named Nick Bright (Justin Kirk) is being held captive and would probably be dead by now if not for the fact that he’s a financial expert, working for Citibank in Pakistan. His captors discover, having Googled him, that he wrote his Princeton senior thesis on the Bretton Woods System and the changing role of the Central Bank. Bright knows all there is to know about futures, options, and derivatives, and it is this expertise that might save his life. If he can just make $10 million dollars very quickly on very little capital for his captors, he will be released. Maybe.

For any theatergoer who’s a finance dummy, don’t stop reading this review. To enjoy “The Invisible Hand” you don’t need to know how money is made on Wall Street any more than you needed to know advanced math to appreciate David Auburn’s “Proof.”

Which is not to say that “The Invisible Hand,” a title that refers to capitalism’s vagaries, is not heavy-lifting in the beginning with its screamed references to militants, kidnapping, terrorism, torture. Akhtar doesn’t stint on any of that, and director Ken Rus Schmoll presents a very realistic staging with an exceptional cast. Fortunately, Akhtar knows how to create suspense, not from an impending beheading but from what Bright teaches his younger captor, Bashir (Usman Ally), about the international stock market. Bears and bulls make money, pigs get slaughtered. Bashir is not quick to learn this lesson, and watching him argue with Bright over when it’s best to sell is downright hair-raising. After all, Bright’s life depends on it.

Equally suspenseful is the good captor/bad captor dynamic that Akhtar creates between Bashir and Imam Saleem (Dariush Kashani). Bright never knows where he should place his allegiance since a real power struggle develops between the two men holding him prisoner.

And that’s just the first act!

Akhtar proved he is a master storyteller with “Disgraced,” now performing on Broadway and not to be missed. “The Invisible Hand” displays a surer grasp of the narrative. He also knows how to seduce and set up an audience. His first act is a thriller, his second act is a lesson; and by the second half – “The Invisible Hand” is that rare and new old-fashioned play; it has something called an intermission – we are ready to stop being simply terrified and just listen.

No doubt about it: Akhtar is a didactic playwright, but then so were Shaw, Brecht, and Miller. After the storm of activity in act one, it’s almost relaxing to take a breath and listen as Bright defends American capitalism while Bashir and Imam Saleem put that economic system through the wringer of their experience. Especially brilliant is the discourse on what’s the greater opiate: religion or money.

“The Invisible Hand” has one last surprise up its sleeve, not to be revealed here. Let’s just say that Bashir turns out to be a better pupil than Bright ever imagined, and Akhtar delivers an indictment of capitalism that would have been the envy of Shaw, Brecht, and Miller.

Ally and Kashani handle their characters’ power struggle in a seamless gradations of check points to see who’s on top now. That ever-shifting hierarchy is enhanced by Jameal Ali’s sympathetic but very obedient Dar.

Watching Kirk go from denial to belligerence to frustration to despair to pride to dumbfounded shock is a master class in acting.