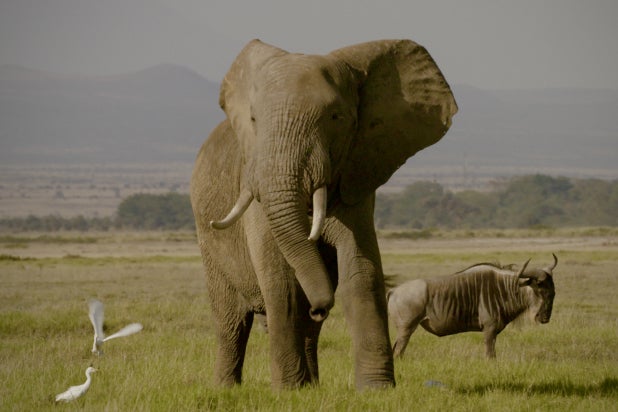 With more than 150,000 elephants killed in the last five years, the scourge of ivory trading has quickly turned into an extinction issue. As reported upfront in “The Ivory Game” — a persuasive new documentary from directors Richard Ladkani and Kief Davidson (“The Devil’s Miner”) and executive producer Leonardo DiCaprio that plays like a rapid response team headed straight for your conscience — at the current rate, African elephants will be wiped out within 15 years.

It’s the kind of worldwide natural disaster, sparked by readily accessed human greed, that lends this globe-trotting investigation into bloody African poaching and illegal Chinese trading, an air of feverish importance. As the filmmakers spotlight the work of wildlife activists and undercover journalists desperately tracking poachers and hunting down information on how the flourishing black market operates, it’s hard not to draw comparisons to recent, celebrated agents of change in this arena: the Oscar-winning “The Cove” (about dolphin-hunting) and the SeaWorld expose “Blackfish.”

The diffuse, international structure and expanding number of heroic personalities in “The Ivory Game” (premiering on Netflix in November) may keep it from striking the same do-something-anything chord those two more personally righteous, single-minded films engendered. That they tackle this labyrinthine, multi-faceted issue with vitality and seriousness, though, is impossible to miss, and worthy of praise.

Initially, Ladkani and Davidson take a villains and heroes approach to get the audience’s blood pumping. The movie opens with a night raid on a Tanzanian village; the country’s top intelligence officer, Elisifa Ngowi, has heard a poaching syndicate run by a nefarious trafficker named Shetani is operating there. From the breathlessness of this action-movie intro, it jumps to southern Kenya, where we meet soft-spoken Craig Millar, a security head for the Big Life Foundation, as he tries to keep track of a beloved elephant named One Ton, a big target of the poachers. (The 2014 ivory-related killing of a tourist-adored elephant named Satao made headlines around the world.)

These early moments have the hushed majesty of a nature documentary, with Millar quietly cluing us in to the rich social intelligence of the animals he’s trying to protect; we watch the great beasts move in packs, but with the added suspense that Millar and his men could come across a slaughtered carcass at any moment. (The movie doesn’t shy away from such crime scenes, eventually, and they always shock.)

When the filmmakers shift their focus to the other end of trafficking, it’s an entirely different world: Beijing shops at which hidden cameras show intricately carved tusks in glass cases at exorbitant prices. (One shocking statistic is learning that a kilogram of tusk, which might net a poor African poacher $7, could eventually go for hundreds of thousands of dollars on the Chinese market once it’s polished and carved.)

Here we meet Andrea Crosta, an Italian activist and co-founder of a whistle-blowing site for “wildlife crime” called WildLeaks, and watch his efforts to turn hot tips into meaningful information about how tusks make their way from Africa to China. One of the movie’s more nail-biting scenes involves a cohort of Crosta’s, her face hidden by the filmmakers to protect her identity, sneaking cameras into a suspected trader’s home under the guise of potentially going into business with him.

Deeply involved in this clandestine fact-gathering force is a young, intrepid Chinese journalist named Hongxiang Huang, whom we also accompany on covert missions, and whose motivation is partly to make sure there’s a “Chinese good guy” in the fight to get his homeland to step up about the elephant crisis. One of the biggest obstacles, we learn, are that Chinese purveyors are legally allowed to sell government-acknowledged stockpiles of ivory. They nonetheless deal in the black market under a veil of corruption to keep their supplies refilled in order to meet the never-ending demand.

Then again, in Africa, it’s not as simple as stopping poachers. The filmmakers also follow Millar as he meets up with average farmers who accept the killing of elephants if it means the creatures stop raiding their crops. To address this, Millar and his organization try to sell the farmers on building fences as a way of safeguarding their food and allowing elephant conservation efforts to continue.

By the time the skillfully-edited (by Verena Schönauer) “The Ivory Game” reaches a kind of peak engagement on all aspects of this disturbing issue over many countries — from a fundraising gala in London to a mass tusk burning in Kenya — it’s enough to sell anyone on the awfulness of this problem and the concerted efforts to curb it, even if the many valorous elephant advocates on screen more often than not sound like mouthpieces, and even if the locations blur after a while.

But Ladkani and Davidson didn’t set out to make a small, vérité movie about what it takes to fight a global scourge. It’s a wealth of information “The Ivory Game” vitally offers, and action it means to incite. That may well be enough to get audiences involved.